The Tyne Valley Community Rail Partnership (TVCRP) is exploring the possibility of staging Commemoration Event(s) to remember the 1939/1940 World war Two evacuations of women and children from the Tyneside industrial conurbation to the relative safety of rural Tynedale. TVCRP has teamed up with Wallsend Local History Society to identify interest particularly those who were involved both from Tyneside and the receiving towns of Haltwhistle, Brampton and the surrounding villages.

The 80th anniversary of the second wave of evacuation is 4th July 2020. Evacuation was staged in September 1939 but during the ”phoney war” many children returned to Tyneside but the on set of German bombing of industrial Tyneside in July 1940 caused major movement away from the affected areas to Tynedale in particular the Haltwhistle and Brampton areas.

A visit by identified Tyneside evacuees who came to the area and then returned home as hostilities eased is intended to form part of the events. We know some came and never returned to Tyneside or returned post war to live in Tynedale. You may have been a child or young person at the time and watched events from the standpoint of a “local” with your school affected by the influx of evacuees.

It is hoped that those with stories to tell will help to develop a new local archive on this topic. This may be the last chance to stage and record with a permanent memorial the WW2 evacuation events. This has been done successfully in some other towns with friendships being renewed and link groups formed.

Colin Moore, who is leading the project on behalf of Tyne Valley Community Rail Partnership says ‘The 80th Anniversary is probably the last chance to commemorate with those involved what what was a significant event in their lives and local World War Two history.  TVCRP are keen to ensure it is not totally forgotten’

If you were involved and are interested in participating, please contact TVCRP stating address, email and telephone number to …

or via email [email protected] 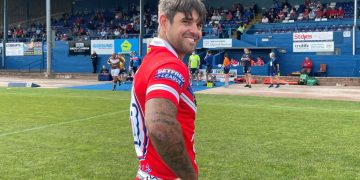 Record-breaker Carl Forber wants to stay involved in rugby league with Workington Town when his playing days are over.