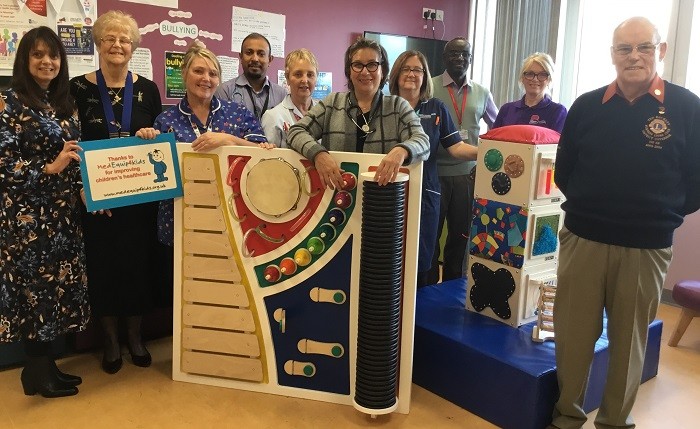 Children’s health charity MedEquip4Kids is bringing a sense of calm to the busy Children’s Ward at Furness General Hospital in Barrow.

The charity has funded lighting equipment, sensory toys and games to help soothe and distract young children who arrive at the hospital feeling afraid, upset or in pain.

Ghazala Baig, Chief Executive of MedEquip4Kids, Sheila Rockley, President of the Furness Lions Club, Ted Rockley, a member of the Lions Club and Heidi Bowron from Bay Hospitals Charity, attended a recent presentation at the hospital.

Ghazala said: “It’s amazing to see how colour and lighting effects can transform the atmosphere of a ward or treatment room.

“Reducing stress before and during treatment is so important for children’s recovery and we’re delighted we could help make their lives a little easier at such a worrying time.

“I’d like to say a big thank you to the donors who made this possible, including the Sir John Fisher Foundation, Sellafield Charity Trust and the Furness Lions.”

Founded in 1985, MedEquip4Kids has a long history of improving the health of children in the North West by providing equipment and facilities which aren’t available from NHS resources.

In previous years the charity has supplied new lighting and sensory toys for the children’s Emergency Department at FGH, which treats more than 4,000 young patients each year for serious illnesses or injuries. These resources were so well used and loved that they needed to be replaced.

The department has also expanded to include a paediatric resuscitation room and a separate room for children with minor injuries. When this development was taking place, the medical team asked if the charity could help by fundraising for a new projector, fibre optic tails, some comfortable furniture for the new rooms and other items.

As well as kitting out the Emergency Department, MedEquip4Kids was able to equip the Children’s Ward with new sensory toys and games, including a musical abstract tactile panel, a tactile totem and a fluorescent tube ladder.

Although distraction therapy can be accessed by any patient, it has particular benefits for children with special needs who are more likely to be distressed or confused by the clinical environment.

Josephine Holmes, Children’s Ward Manager at FGH, said: “We are very lucky to receive the donation of sensory equipment for the Children’s Ward. It will make such a difference to the children’s experience during their stay on Children Ward.”