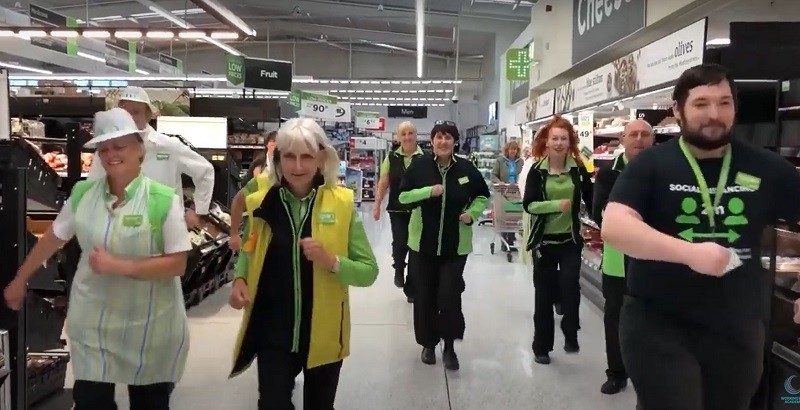 Staff at the West Cumbrian secondary created their own version of the comedian’s Big Night In success, (Is This The Way To) Amarillo, after an initial suggestion from English teacher Julie McTaggart. Their community-based production features more than 150 local people and attracted in excess of 20,000 views on Facebook.

Children from the academy sent in videos of themselves marching and singing along in their homes and gardens. Such was the take up the video had to be extended to accommodate as many people as possible.

The academy’s headteacher Des Bird, who appears in the video as both Uncle Sam and in an eye-catching newspaper suit, said: “I am delighted to be able to thank the NHS and key workers in our community with this video.

“It was great fun to make, with so many staff, students, families and members of the community getting involved. Workington Academy is a great school in a fantastic community who are pulling together brilliantly at this difficult time.”

The video has attracted hundreds of shares and comments including ‘what a great lift this is, enjoyed every minute’ and ‘could go to Number One, brilliant’.

Nic Tweddle, the academy’s Year 7 Director of Learning, said: “It has surpassed all expectations. The reaction from the community has been brilliant and we’re so pleased that our fun way of saying thank you has been so well received.”

The video was produced by Andy Williamson, Teacher of ICT, Computing and Digital Media and Website and Social Media Manager for CET.

The academy is now planning Workington Goes to Amarillo, a fund-raising event that will see volunteers walk, cycle or run the equivalent of the 4,500 miles between Cumbria and Texas.

Workington Academy is part of Cumbria Education Trust, which is responsible for nine academies and almost 4,000 pupils and students across the county.

Teachers at other trust schools have also used video throughout the lockdown to keep engaged with children – and raise a smile. Staff at William Howard School in Brampton did their own take of Queen’s I Want To Break Free and Longtown Primary danced and mimed to S Club 7s’ Reach For The Stars.

A small boat was stolen then abandoned in Windermere in the early hours of Thursday.