Volunteers in the Cumbria Police specials teams are playing a key part in helping the constabulary boost policing during the coronavirus pandemic. 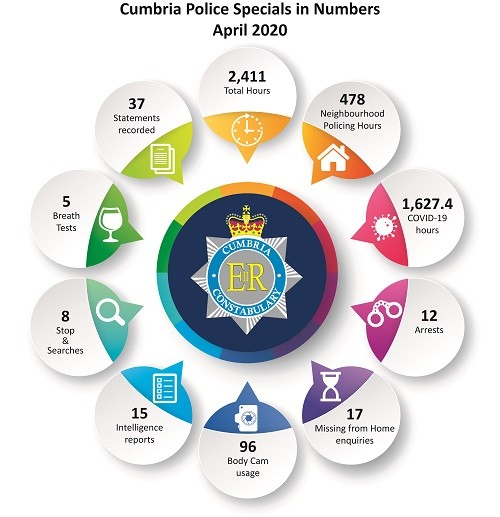 These volunteers – often known by the public as specials – play a crucial role in fighting crime and making our streets safer.

They form a vital link between their community and the police service.

Among those giving up their free time to volunteer in policing is Special Constable Stephen Berry.

He is one of a number of Sellafield Ltd staff who have been released by their employer to volunteer as a special constable full-time in response to the Coronavirus pandemic.

Other special constables are also currently performing full-time volunteer roles after being furloughed by their employers.

It is the latest stage in his three-year specials career, based in Workington.

He said: “I’m very proud to be a special constable, supporting my community, particularly during this unprecedented time

“Since being temporarily released by Sellafield to help during the current Coronavirus pandemic, I have been aligned with a response section working out of Workington police station.

“My duties over this period have included Covid-19 reassurance foot patrols in Workington, as well as assisting regular officers by double crewing with them on general response supporting a wide variety of jobs.

“I think all the parties involved, Sellafield Ltd, Cumbria Constabulary and myself, all benefit from this arrangement.

“It also highlights the responsibility Sellafield displays to the support of the local community as well as providing extra resources.”

Superintendent Lisa Hogan is the head of the people department at Cumbria Constabulary.

She said: “Stephen has shown real commitment and dedication to policing in Workington.

“He is just one example of the many special constables who provide an essential service.

“They are all putting themselves forward to support their communities. I am proud we are able to call on their service during these challenging times.”

Sellafield Ltd proudly supports its employees to volunteer as part of the Employer Supported Policing Scheme.

Staff work with Cumbria Police to encourage employees to get involved in all aspects of volunteering in policing.

Employer Supported Policing is a national scheme which acts as a partnership benefitting employers, their staff and the police service.

It works by releasing special constables and police support volunteers to volunteer in the community.

It is a great way for employers and businesses to play their part in making their community safer.

The scheme asks organisations to consider releasing their staff by giving them paid time off to undertake their volunteer police duties.

Alan Rankin, HR transformation lead at Sellafield Ltd, said: “We are delighted to support Cumbria Constabulary Citizens in Policing, and in particular the incredibly important role special constables play in working to keep the public of our area safe.

“In these unprecedented and challenging times we are proud that Stephen has chosen to step up and agree to be deployed full time as a special constable to support the Covid 19 response.

“He is a great example of our employees who are determined to make a real difference and contribution to their local area.

“As an employer we are humbled that so many of our employees commit time and energy to their communities and Employer Supported Policing is a critical part of that.

“Sellafield Ltd will continue to provide ongoing support to the Citizens in Policing scheme and we would encourage any of our employees to become involved.”

Cumbria’s Police and Crime Commissioner, Peter McCall, said: “I am incredibly grateful to all of our police officers, PCSOs and staff who have continued to work throughout the current health crisis with little regard for their own safety.

“Like so many others they have gone above and beyond to serve and protect the public.

“I do want to particularly thank our Special Constabulary officers who are unpaid volunteers who carry the same powers, responsibility and accountability as their regular counterparts, but who do it for free and as volunteers.

“This demonstrates incredible commitment to our community and literally selfless service and a genuine concern for communities right across the county.

“It has been encouraging that out of the tragedy of the Corona crisis we have seen volunteers from all walks of life, serving in all kinds of ways to support us all. And of course the NHS, we are grateful of course to them all – and especially to our special police officers, I would just like to say: Thank you for your service.”

WHAT IS THE SPECIAL CONSTABULARY?

The Special Constabulary is a voluntary body, whose officers form a vital part of the police family, working alongside regular colleagues to police the communities of Cumbria.

Specials perform a variety of police duties to support regular officers with the day-to-day policing of Cumbria.

Armed police were called to a pub in Workington town centre after reports of a customer with a gun.