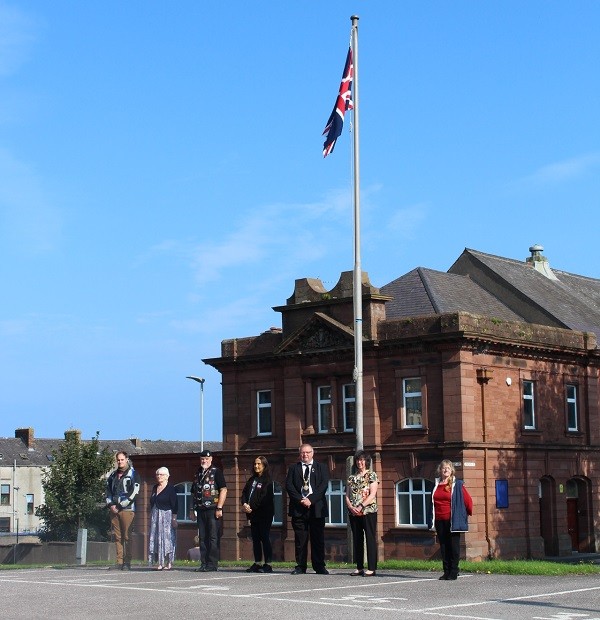 The union flag has been raised at the Town Hall in Workington to mark the 75th anniversary of VJ Day.

The flag was raised by the Mayor of Workington, Cllr Janet King, with the Mayor’s Consort, Cllr Herbert Briggs, and representatives from the Workington branch of the Royal British Legion.

VJ Day marks the day that Japan surrendered on the 15 August 1945, which in effect ended the Second World War. This year is the 75th anniversary and under normal circumstances would have been commemorated with public events across the country. Many events were cancelled due the COVID-19 crisis and were replaced with smaller private events or online activities.

Cllr King commented; “Whilst we could not gather as a community, it was still essential to mark VJ Day, especially on this notable anniversary. The personnel who served in the Far East can often be overlooked or forgotten, so it’s important to take the time to remember the sacrifices they made and offer our gratitude and respect.”

Workington Town Council has asked residents to share their family memories and stories about VJ Day, or to share videos, poems, and photographs of this year’s commemorations. Participants can get in touch via the Town Council’s Facebook page, Twitter, or by email: [email protected]