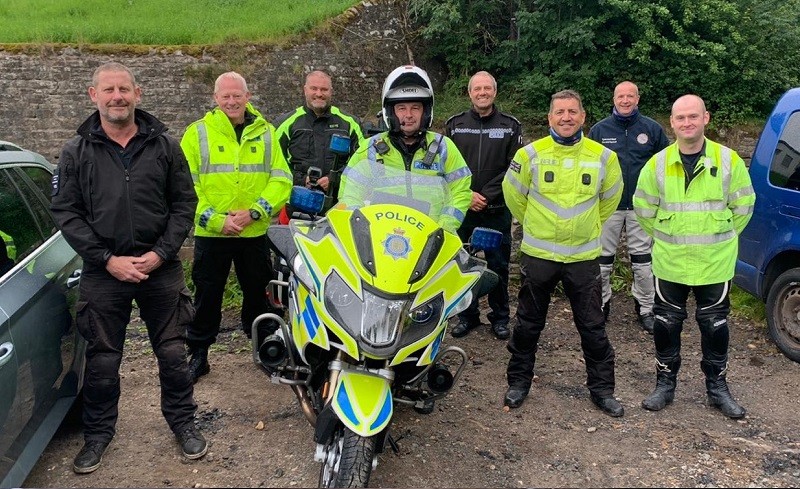 Emergency services from Northumberland and Cumbria have worked in partnership to educate motorists about staying safe on our rural roads.

Officers from both forces were in Alston to engage with motorcyclists at one of the main meeting points between the counties, and a well-travelled route known for its hairpin bends.

The aim of Operation Weekender and Spitfire is to educate and raise awareness to motorcyclists as well as other road users on how to stay safe on rural roads through engagement.

Since March alone Cumbria has had two motorcycle fatalities and several other road traffic collisions involving motorcycles that were perceived as initially life threatening.

We welcome all to enjoy our scenic routes, and as well as engaging we are responding to community concerns over the speed of some motorcycles and particularly through lower speed limit villages, all of which are completely unacceptable.

Collision Reduction Officers continue to work with the community based road safety meetings of Casualty Reduction and Safer Highways Group (CRASH) and the Cumbria Road Safety Partnership which helped to identify this area as one of concern.

In addition to officers from both forces deployed to the area, The Crash bike was also on show which is a visual display of the tragic impact that some collisions can result in. The Crash Bike is that of Allan Stratt who sadly lost his life in 2018 following a collision at Hartside.

On Sunday, officers from both forces were joined by partners from North East Ambulance Service, Tyne & Wear Fire Rescue Service, Northumberland Fire & Rescue and Northumberland Safer Roads Initiative to engage and educate motorists on how to help keep themselves safe on the roads.

The event was a great success with pedestrians, motorists – both on four wheels and two – and cyclists paying a visit to have a chat with the team and learn about staying safe when using the rural road network.

Sergeant Paul McIntosh, of Northumbria Police’s Motor Patrols Department, said: “Sunday was a little different to our previous Operation Weekender events as this was a joint partnership initiative with Cumbria Police as we were engaging with motorists along the border.

“We had a range of visitors come to see us who were interested in how they could help ensure the safety of themselves and their families while using the rural road network.

“It was a great success working with another force, and having the support of the fire and ambulance services to provide advice was invaluable as they were able to share their experiences to raise further awareness around the importance of keeping safe on the roads.

“The event also gave the public a chance to voice their concerns to us and we can now look to work together to resolve these.”

Inspector Steve Minnikin from Cumbria Police Mobile Support group said: “This was a great opportunity to work jointly with our neighbouring colleagues in Northumbria to raise awareness of road safety, at one of the main motorcycle meeting points in between both our force areas.

“Unfortunately since March we have had two motorcycle fatalities in Cumbria and many other collisions leading to serious injuries.

“We continue to encourage people to enjoy our roads but take caution and keep to the speed limit, which has been raised as a concern by the local community.

“I would also like to take this opportunity to thank the family of Allan Stratt for their bravery and allowing us to use this bike as a visual aid to show the tragic impacts that road collisions can have.”