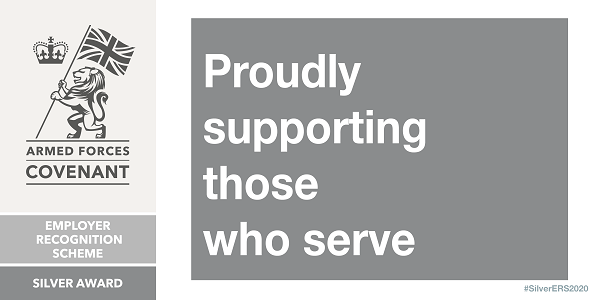 Carlisle City Council has achieved a Silver award under the Ministry of Defence Employer Recognition Scheme for their support to Defence and the wider Armed Forces community.

The Employer Recognition Scheme was launched to reward employers who support Defence People objectives and encourage others to do the same. This includes employing serving and former members of the Armed Forces community and demonstrating flexibility towards training and mobilisation commitments for Reservists and Cadet Force Adult Volunteers.

Cllr Elizabeth Mallinson, Portfolio holder for Health and Wellbeing said: “As Carlisle City Council’s Armed Forces Champion I am delighted with this news.

“As a council, we are committed to supporting the Armed Forces and want to strengthen our knowledge about the issues facing them and their communities. We’re proud of achieving the Silver award and are already working towards achieving the Gold award in the future.”

Carlisle City Council was one of 36 North West organisations to be awarded Silver.

Johnny Mercer, Minister for Defence People and Veterans said: “The breadth and diversity of the winners this year shows how business support for the Armed Forces continues to grow no matter the sector, company size or location. I am grateful for the positive attitude and flexible policies these organisations have adapted towards the defence community, which is testament to the fantastic contribution our serving personnel, veterans and their families can make to any organisation. I am delighted that so many companies are supporting our people and that, through this scheme, we can give them the public recognition they deserve.

Jan Cox, Regional Employer Engagement Director at the North West of England and the Isle of Man Reserve Forces’ and Cadets’ Association (NW RFCA), said: “On behalf of the Ministry of Defence we are honoured to be able to recognise the support and commitment given to the Armed Forces Covenant by employers in the region, through the Employer Recognition Scheme awards. Each recipient has demonstrated not only that they support the Covenant and the Armed Forces community, but also that they are prepared to support their Reservists, Service Leavers, Veterans and Cadet Force Adult Volunteers in the workplace. The experiences and skills gained through service in the regular forces, with the Reserve Forces, or with the Cadet Forces, equips people with valuable life skills -self-discipline, confidence, communication, teamwork and leadership – all of which are in demand by employers.”