The inspirational fundraiser and his social media star Springer Spaniels who have raised over £244,000 for charity has received Prime Minister Boris Johnson’s daily Points of Light award.

Kerry Irving, from Keswick, had his life transformed following a horrific car crash through a connection with his miracle dog, a spaniel named Max. Kerry was left with crippling back pain and depression following the accident in 2006, and barely able to move for two years.

A chance encounter with Max, his neighbour’s dog, provided him with purpose to leave the house again and rehabilitate by taking him on walks in the Cumbrian countryside, with Kerry eventually adopting him after Max’s owners moved away from the area. 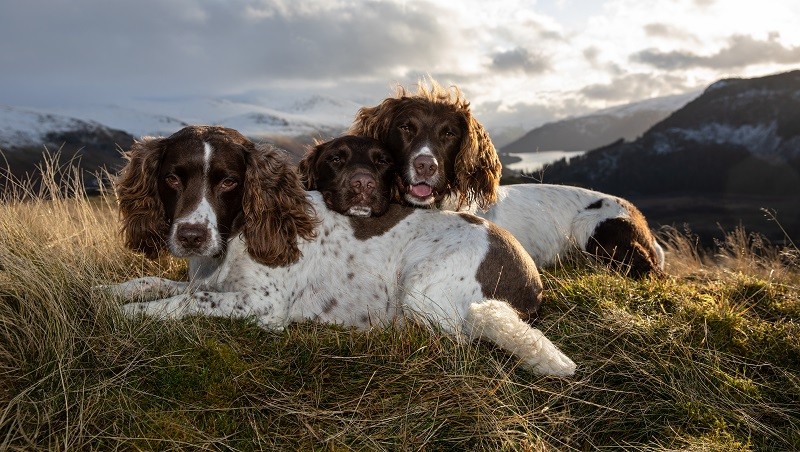 Along with Kerry’s other dogs Paddy and Harry, they have now become social media sensations through their daily live-streamed videos of walks and swims in the Lake District, and raised over £244,000 for charities, including raising over £100,00 in six weeks in August this year for the UK’s leading vet charity PDSA following a sponsored climb of Ben Nevis.

In a personal letter to Kerry, Prime Minister Boris Johnson said: “Every day I take a moment to write to somebody to thank them for inspiring others and today that person is you.

“I am lost in admiration for the fortitude you have shown following your horrific accident and how you have channelled your strength into charitable endeavours. With your ‘miracle dog’ Max – and Paddy and Harry too – you have scaled the heights of Ben Nevis and lifted the hearts of the nation, all while fundraising for a brilliant cause.”

Reacting to the Prime Minister’s announcement, Kerry said: “It’s an honour to accept this award for Max, Paddy and Harry, our loveable English Springer Spaniels. The difference a dog can make to someone’s life, how they lift the spirits and inspire an online worldwide community shows the power of animals and human interaction. We have met people from all walks of life, with much different backgrounds, cultures and upbringing but all have a love for their very own miracle dogs. We thank you so much.”

Kerry is the 1475th person to receive the Prime Minister’s UK daily Points of Light award, which was first launched in April 2014 to recognise outstanding individuals making a difference where they live. Each day, someone, somewhere in the country is selected to receive the award to celebrate their remarkable achievements, including hundreds of volunteers who have been recognised for how they have served their communities through the coronavirus pandemic.