The first grey seal pup to be born this breeding season was spotted at South Walney Nature Reserve near Barrow earlier this week (Monday 5 October).

This is the sixth year running that pups have been born on the island. The highest number of pups born was in 2017 when 10 pups were recorded.

Dr Emily Baxter, Senior Marine Conservation Officer at Cumbria Wildlife Trust said: “When I headed down to South Walney on Monday morning to do a seal survey with our new Marine Conservation Officer, Georgia, we were delighted to be greeted by the first seal pup of the season! We’re lucky enough to have Cumbria’s only grey seal colony here at South Walney Nature Reserve and in fact this is the only place that seals haul out in large numbers in the whole of the North West! It’s a precious colony that has grown rapidly over the last 10 years. We’re constantly monitoring seal numbers and earlier this year we counted 412 on one survey.”

Those keen to see the pup are encouraged to keep an eye on Cumbria Wildlife Trust’s SealCam for a close-up view. It can be watched online at https://www.cumbriawildlifetrust.org.uk/wildlife/cams/seal-cam.

Due to the young age of the seal, it is incredibly vulnerable to disturbance, which would cause the mother to abandon it and the pup to starve. For this reason, there is strictly no access to the area of the nature reserve where the seal pup is, and so it is not possible to view the pup at South Walney Nature Reserve. However, the rest of the seals can be seen playing and fishing in the water at high tide, along with thousands of wintering wildfowl and wader birds, from elsewhere on the nature reserve.

The hide where the seals can usually be viewed from is currently closed but the Trust is in the process of creating  a screened viewing point next to it, to allow people to get a better view of seals in the water, without disturbing wildlife.

The mother will stay with the pup for a few weeks, feeding it with fat-rich milk, until it is weaned. During this time, the pup will gradually moult its thick white fur, revealing its adult coat with its own individual markings. After weaning, the pup may remain on the island for up to another few weeks or so before it is ready to head out to sea to forage for itself.

Female grey seals give birth in the autumn to a single pup. They usually return to their own place of birth to breed year on year in the same location. Towards the end of the weaning period the seals will mate again.

Cumbria Wildlife Trust has carried out seal surveys at South Walney Nature Reserve every two weeks, between September and March, since 2005. The surveys aim to continually monitor the seal population from year to year.

The behaviours displayed by the seals are also monitored. This is to gain understanding about the amount of time that seals spend exhibiting different types of behaviour and how this is affected by human disturbance, such as boating and recreational use of the sea surrounding Walney Island. The findings from the survey help to create management plans for the nature reserve.

Dr Baxter said: “Over lockdown and during the recent nice weather, there have been a number of incidents with people landing kayaks onto the protected beaches. This has caused a significant amount of disturbance, including putting flocks of thousands of waders into the air and scaring the seals away, which reduced numbers and split up the colony a couple of weeks ago.”

During the 1970s and 80s, seals were seen only singly around Walney Island and gradually their numbers have increased, with hundreds of individuals using the nature reserve at certain times of the year.

South Walney Nature Reserve is open to visitors, including the car park, but please note the visitor centre remains closed. Please note dogs are not allowed on the nature reserve, apart from registered assistance dogs. 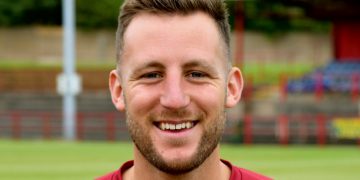 Injury-hit Workington dropped points for the second game in succession but are still unbeaten, and still lead NPL West.