Tyre safety operation carried out on A69 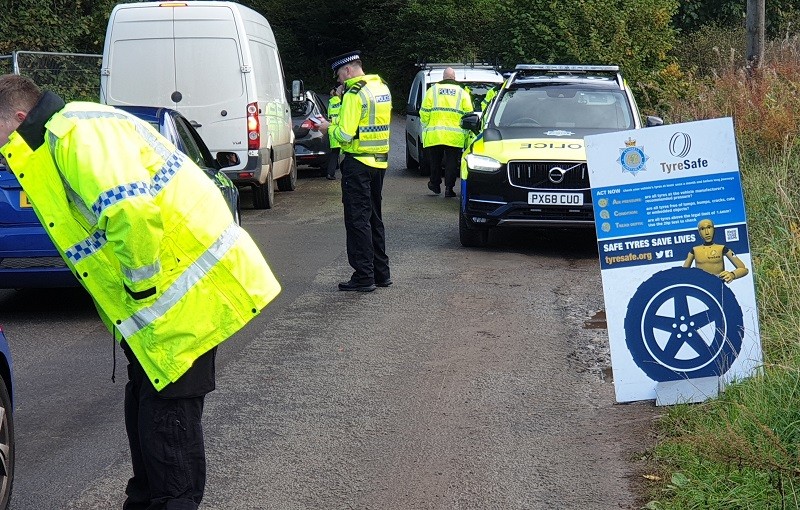 Officers from both forces set up checkpoints along the A69, officers from Cumbria were based at the Hayton Lane End lay-by.

All last week the force ran a week long social media campaign reminding the public to check their tyres as part of tyre safety month.

Inspector Steve Minnikin said: “It’s important that drivers take responsibility of the condition of their vehicles.

“A simple check on your tyre condition, tread and pressure should be done as least monthly or before a long journey.

“Your tyres are constantly in contact with the road and if they are defective they could have a contributing factor in causing fatal or serious injury to you or other road users.”

More information on tyre safety can be found here

During the operation officers stopped 200 vehicles and found two vehicles with defective tyres, one vehicle without no MOT and several Vehicle Defect Rectification Scheme for minor defects.

Inspector Minnikin continued “This operation was not just to enforce but to educate drivers on the dangers of not maintaining their vehicles.

“it was good to see out of 200 vehicles only two were found to have defects, showing that many drivers are conducting the essential checks needed on their vehicles.

Sergeant Paul McIntosh, of Northumbria Police’s Motor Patrols Department, said: “Operations like this are vital as they help to raise awareness of the importance of why it’s important to keep our vehicles in good condition.

“We will continue to work with our partners in Cumbria Constabulary to ensure the A69 remains a safe route for all motorists and that those using this road are responsible and ensure their vehicles are in tip top condition.”

Peter McCall Police and Crime commissioner said: “Safety on our roads is one of the key priorities for Cumbria and working alongside officers from Northumbria on a joint operation around tyre safety, is essential as we move into more wintery conditions.

“Being prepared and thinking ahead about winter driving conditions may seem obvious, but all too often such safety measures get overlooked.

“Rather than a simple glance or quick once over, it is important that people take the time to thoroughly check, make sure tyre pressure is correct and the condition and tread of the tyre is compliant.

“We should all be responsible drivers and carry out regular checks throughout the winter months to make sure that our tyres are in the best possible condition for maximum safety.”

A motorcyclist who filmed himself pulling wheelies and hitting 130mph was brought to court after he crashed and his camera...