Calls for radiotherapy unit to be set up in Kendal

Calls have been made for a radiotherapy unit to Kendal’s Westmorland General Hospital.

In the South Lakes, cancer patients have to make a two to three-hour round trip for five days a week, for weeks on end to reach their nearest treatment radiotherapy centre in Preston.

During a speech in Westminster Hall, Westmorland and Lonsdale MP Tim Farron yesterday, January 12, cited the National Radiotherapy Advisory Group who say it is bad practice for patients to have to travel for more than 45 minutes for treatment.

Mr Farron said: “Networked satellite radiotherapy units have been a huge success elsewhere in the country and, once they open, have been shown to increase the number of people able to take up that life-saving treatment. Satellites save more lives.

“We have the space at the hospital, designs have been done, the bid has been written and rewritten, and the inaction of managers in NHS England and Ministers in the Department of Health is inexcusable.

“It is a reminder of why rural communities feel so taken for granted and ignored by the Government and by NHS bosses nationally and regionally.

“Talk of levelling up the north is meaningless when Ministers appear not to realise that there is 100 miles of England north of Preston until the next nearest cancer centre.

“Today, I ask the minister to instruct NHS England to work with our local trusts in Cumbria and Lancashire finally to deliver our long-awaited satellite radiotherapy unit at Kendal. Our community will listen carefully to her response.”

“I would just be slightly careful. Cancer alliances are mapping out cancer services in their areas, and I am very happy to meet colleagues who would like better provision in their local area, but they also need to meet their cancer alliances, which are looking at service provision locally.

“It has to be a local decision, because local oncologists have to feel that they are able to support the multidisciplinary team who support the radiotherapy process, ranging from diagnostics through to the treatment itself.

“That has to be in place, so it does absolutely need to be done on a local basis, but I am happy to meet colleagues if they feel that the case is not being heard locally.” 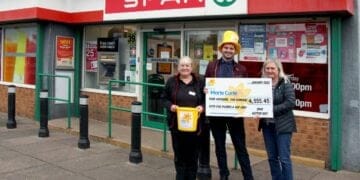 Celebrations are underway at Hutton Way in Carlisle – the highest fundraising SPAR store in Cumbria for charity Marie Curie.