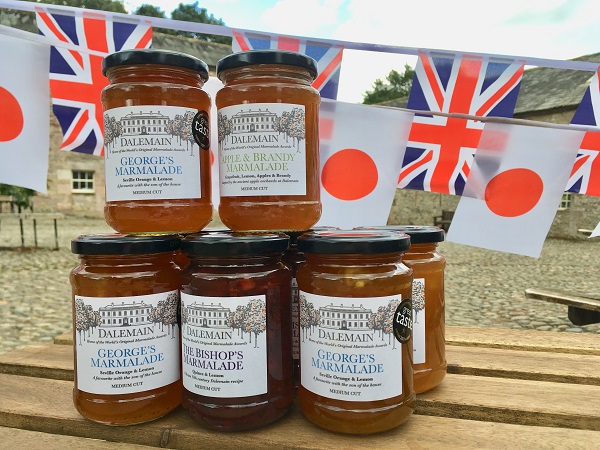 Dalemain Mansion, home of the World’s Original Marmalade Awards & Festival, is appearing in a series of food events throughout Japan in the run up to the inaugural Japanese Festival of Marmalade, which is to be held in association with the Dalemain Marmalade Awards in Ehime, Japan in May 2019.

Dalemain has long been the ‘home of marmalade’ for aficionados around the world, with the World’s Original Marmalade Awards receiving thousands of entries every year from over 30 countries including Australia, India and Botswana. Japanese entrants are some of its most enthusiastic competitors and this passion has led to plans being made for the first ever Dalemain World Marmalade Awards & Festival in Japan. In celebration of this event and to ‘spread’ the love of marmalade throughout Japan, Dalemain Mansion representatives are delighted to be attending esteemed British Fairs in both Tokyo and Osaka.

The Mitsukoshi British Fair in Tokyo, which opened on 6th September, sees Dan Lepard, award-winning baker and Marmalade Awards judge and patron, hosting a series of ‘marmaladic’ afternoon teas, incorporating Dalemain marmalade into traditional recipes, which are proving hugely popular among the Japanese visitors. Jane Hasell-McCosh, founder of the Marmalade Awards, will be travelling in October to the Hankyu British Fair in Osaka to talk about the Awards and help to judge a special ‘pop up’ marmalade competition, which will give spectators insight into the main event in May.

The Dalemain World Marmalade Awards in Japan will take place in Yawatahama, in the Ehime region, in May 2019. Jane Hasell-McCosh will once again be a judge in the competition.

Jane says: ‘We have always received huge numbers of entries into the World’s Original Marmalade Awards from Japan, and have marvelled at how fresh and delicious they are, made with wonderful Japanese citrus fruits including yuzu, daidai and sudachi. The Japanese really do understand the complexity and joy of marmalade and I am looking forward to having the chance to taste many more flavours from all over Japan. My visit in October will be a fantastic opportunity to introduce marmalade to people across Japan who do not yet know what they are missing!’

The Dalemain World Marmalade Awards & Festival in Japan follows in the footsteps of the Australian Marmalade Awards, which will take place in Adelaide in September 2018. Jane Hasell-McCosh is delighted to see the joy of marmalade being shared all over the world, and hopes to introduce many more Marmalade Awards and Festivals worldwide.