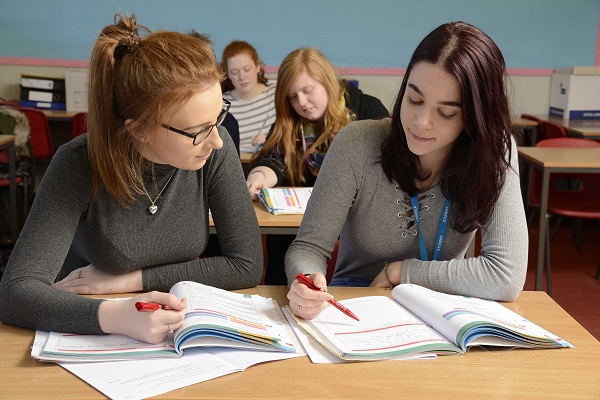 Staff and students are celebrating after new figures show Furness College is performing way above the national average for high grades in English and maths.

Latest data from MiDES shows the college is in the top 15 per cent of further education colleges nationally for GCSEs in these critical subjects.

Nearly 40 per cent of learners at the college achieve higher grades in maths – exceeding the national average of 17 per cent – while English pass rates are at 45 per cent, bucking the national trend of 26 per cent.

Principal and Chief Executive Andrew Wren said: “The improvements that have been made have helped far more students to achieve the higher grades in English and maths, which they need to progress.

“More than 80 per cent of our students at the Channelside campus do not have English and/or Maths GCSE grade 4 or more when they join us.

“The fact that so many go on to secure the all-important subjects is a testament to the quality of teaching here and our experienced team who are relentlessly focused on helping students achieve.”

Furness College, which has two campuses in Barrow, is the biggest college in Cumbria offering professional and technical courses, A levels higher education courses.

Mr Wren said the figures also show that students at the Rating Lane sixth form were achieving their target grades and chosen places at university, higher apprenticeships or employment.

This value-added measure, which looks at how well students are performing above their target grades, was also very high for A levels putting it in the top third of colleges across the country.

Nationally, Furness College has high rates for progression with some 96 per cent of students going on directly to employment or further study.

Mr Wren said the focus at the college was the high quality of teaching and learning which takes place in the classrooms and state-of-the-art workshops.

“This ensures that students perform better there than at the average college, leading to great value-added scores and very high rates of student progression into employment or further study.”

Furness College is holding an advice session for Year 11 students on Saturday (March 9) at the Channelside campus from 1pm to 3pm. People can drop in for specialist advice on courses and next career steps.

Jade Chelton achieved her maths and English GCSEs at sixth form and is now studying the access course at Channelside campus with a view to applying for university.

Jade said: “I left school at 16 and my GCSE exam results weren’t quite what I wanted. I had a child and was a full-time mum for two years until she had left nursery. In 2017, I wanted to get back into education and applied to Barrow Sixth Form after an informal, helpful chat with my tutor, Kevin.

“Studying at Barrow Sixth Form has certainly built up my confidence and I’ve made new friends. In the future, I hope to go into a healthcare or business related career, but I’m still considering my options. I’ve always wanted to go to university and that could now be a possibility.