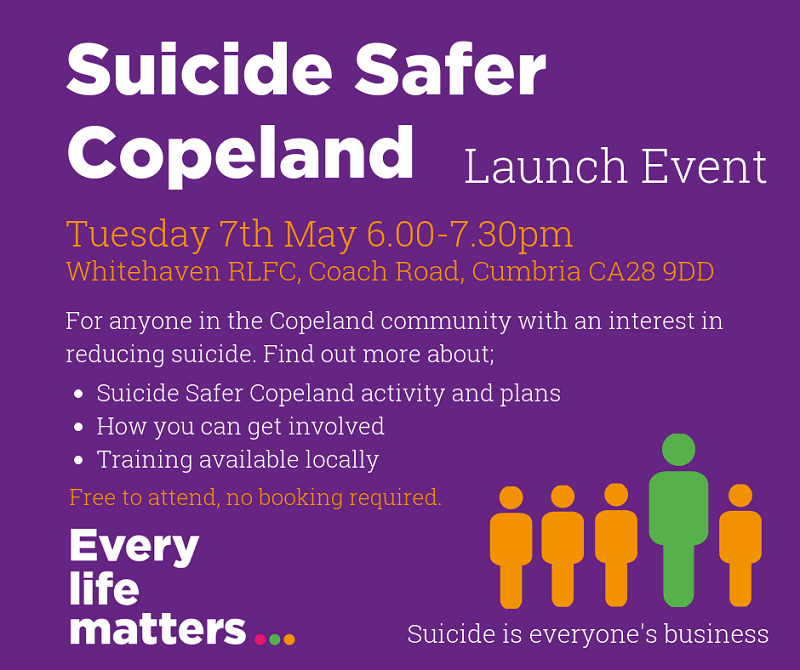 Suicide Safer Copeland is an initiative being launched on the 8th May aimed at reducing suicide in the area, delivered by Every Life Matters, a new Cumbria Suicide Prevention Charity set up in late 2018 to address Cumbria’s stubbornly high suicide rates.

On average we lose one person a week to death by suicide in Cumbria. Double the number who die on our Counties roads. Additionally, one in five Cumbrian residents will have thoughts of suicide, and one in fifteen will attempt suicide, at some point in their life.

Cumbria’s suicide rates remain consistently higher than the national average, and a disproportionate amount of these deaths are also focused on the West coast of Cumbria including Copeland.

Juliet Gray, Training Manager, and co-founder of Every Life Matters said: “Suicide needs to be addressed across all areas of our society. It’s important to understand that around three quarters of people who die by suicide are not in contact with any mental health services in the year leading up to their death This means suicide prevention needs to be community wide concern. It need to be everyone’s business.

“It is friends, family, work colleagues, neighbours and our network of community and voluntary organisations, not just those in NHS mental health services, who have an important part to play in saving lives. These people are best placed to know when something is wrong, to spot changes in behaviour and the signs that someone might be at risk of suicide. Everyone across our community has potentially an important part to play in stopping suicide.”

“Anyone in the local community who has an interest in preventing suicide is encouraged to come along to the launch event. And a key focus of the project is empowering local residents to take action against suicide in whatever way they can, in their communities, their workplaces and in their own homes.

“At the heart of the projects is getting people to talk more about suicide. It is still a taboo subject. We want people to feel comfortable talking about suicide, and asking someone they are concerned for directly and clearly about suicidal thoughts.

“A common myth is that asking someone directly if they are thinking about suicide will put ideas into their head or make the situation worse. This is not true. Often people feel a sense of relief to be able to share such distressing thoughts.

“It’s estimated that around 1 in 17 people will have suicidal thoughts every year, and 1 in 5 people throughout their lifetime. We wat to see an end to people struggling alone with suicidal thoughts. But we know this requires a major shift in our society’s attitudes and we need to chip away at it over some time – and it needs to be done right across our society.. But recent changes in attitudes towards mental health in general show it can happen.”

Kate Bainbridge, and her daughter Becs, who are founder Trustees of Every Life Matters, are all too aware of the devastating impact suicide can have. They lost their son, and brother, Ben to suicide in 2014. Kate said: “My son Ben was a brilliant and caring young man. He took his own life on the 14th June 2014. Until that day, I had no understanding of suicide. It was something that no one ever seemed to talk about openly. Suicide was something I had read about, heard about on the news, in short it was something that happened to other people.

“Mine and my family’s life changed forever that day. How could any of us not have known? He had everything to live for didn’t he? He was caring, he was outgoing, he was an organiser, he was looked up to by his peers, it seemed he had everything to live for. Ben’s death had far reaching effects locally amongst his friends, his partner, work colleagues and obviously us, his family.

“I ask myself daily – Could I have done more? Should I have recognised a sign? What did I miss? I needed answers and I needed to make a difference, so I began to look at how I could get involved locally with stopping suicides, and to be honest there was precious little out there.

“And it echoed my fear that we still as a society don’t talk about suicide. A fact that astounded me was that suicide is the biggest killer of our young men. How could it not be talked about?”

Kate, Becs and a group of other people affected by suicide, or working in the suicide prevention field, formed Every Life Matters as a way to address this very significant issue. Every Life Matters offers Suicide Prevention training across the County and is just about to launch a series of Suicide Safer Community projects, starting initially in Barrow-in-Furness and Copeland where suicide rates are particularly high for the County.

Every Life Matters, will be launching Suicide Safer Copeland on Tuesday 7th May, 6.00-7.30pm, at Whitehaven RLFC. Anyone interested is encourage to attend. No need to book. Refreshments provided. The meeting will give an overview of the projects plans and an opportunity to find out more about suicide in our society and what difference we can all make to address it.