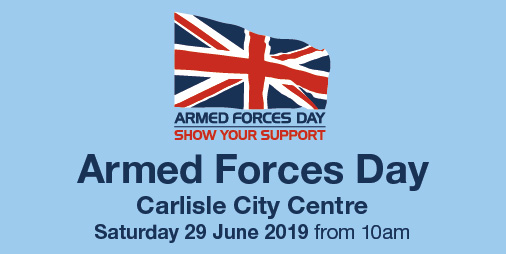 An event to commemorate Armed Forces Day, a national celebration of the UK’s Armed Forces – past, present and future – will be held in Carlisle’s city centre pedestrianised area on Saturday, 29 June.

Organised by a large working party of military organisations, including the Royal British Legion, with support from Carlisle City Council, it will be held from 10am onwards.

Stalls and exhibitions will be in place from 10am. Monies raised on the day from the stalls and raffles will be shared between the three Service Benevolent Funds.

The Armed Forces Day programme will also include live music provided by the Border Concert Band and a Cadet Drill competition at 2pm.

The Mayor of Carlisle, Cllr Marilyn Bowman will also present a Citation of Appreciation to the Armed Forces, at 3.30pm, which will be received by the 2 Battalion Duke of Lancaster’s Regiment.

Tony Parrini, Royal British Legion Branch Secretary (Carlisle and Stanwix Branch), said: “It remains extremely important that the Armed Forces and ex Forces Organisations and Community are kept in the public eye. For many, the need for an effective defence of our country has slipped off the radar, yet our serving personnel are deployed on active duty in many overseas locations as well as the defence of the United Kingdom.

A formal flag-raising ceremony will take place outside the Old Town Hall on Monday 24 June at 12noon and fly for the week ahead of the Armed Forces Day events on Saturday, 29 June. The flag-raising will be attended by the Mayor of Carlisle, Cllr Marilyn Bowman; together with the Lord Lieutenant of Cumbria or her representative, Carlisle City Council’s Deputy Town Clerk & Chief Executive, Darren Crossley, the President of The Royal British Legion (Carlisle & Stanwix Branch) and members of the local Army and Air cadet units. Members of the Army Cadets will raise the flag.

Armed Forces Week will conclude with the flag-lowering ceremony on Saturday 29 June at 3.30pm. Attendees will include: the Mayor of Carlisle, Cllr Marilyn Bowman, together with the Lord Lieutenant of Cumbria or her representative; the President of the Royal British Legion (Carlisle & Stanwix Branch), ex-Services Veterans and members of the local Army and Air Cadet Units.

The flag will be lowered by a member of the Air Cadets. The assembled veterans, serving personnel and cadets will then parade passed the Mayor of Carlisle to conclude the event.