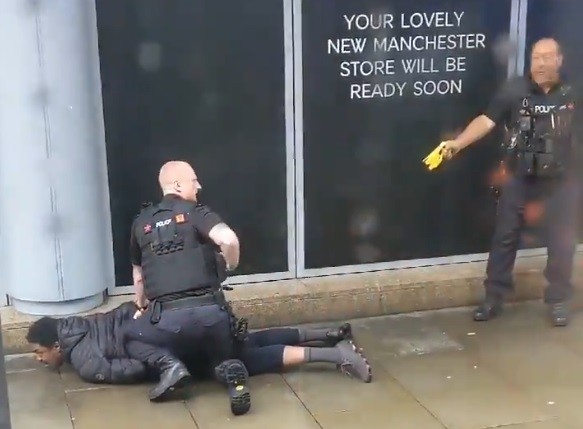 Police are currently responding to an incident at the Arndale Shopping Centre in Manchester City Centre.

Officers were called to reports of a multiple stabbing at the Arndale shopping centre at 11.15am earlier today (Friday 11 October 2019).

A GMP spokesman said: “At this stage we believe that four people were injured during the incident – not five as previously reported.

“A man in his 50s has also been taken to hospital with stab wounds.

“A fourth victim – a woman in her 40s – who was not stabbed – has been assessed and did not need to go to hospital following assessment by paramedics.

“A man in his 40s – who was arrested at the scene on suspicion of serious assault – remains in custody for questioning.

“In these early stages we are keeping an open mind about the motivation of this terrible incident and the circumstances as we know them.

“Given the location of the incident and its nature officers from Counter Terrorism Police North West are leading the investigation as we determine the circumstances.”

“He was armed with a large knife and as he entered Exchange Court, he began lunging and attacking people with the knife.

“Two unarmed Police Community Support Officers were in Exchange Court and attempted to confront the attacker.

“He then chased them with the knife as they were calling for urgent assistance.

“The man attacked people around him and we understand 5 people were injured by him. Although the injuries are nasty, we are told that thankfully none are life threatening.

“We know there were lots of people in the Arndale at the time and people can help us by sending any images or footage they have taken at the scene via the GMP website.

“This is a truly shocking incident, injuring a number of people and deeply frightening hundreds more.

“We can reassure that the response was rapid and we have the man we believe to be the attacker safely in custody.

“We will now be working to understand why the man committed this awful attack.

“Other officers, both armed and unarmed, quickly responded and within 5 minutes he was challenged and detained by armed officers on Market Street outside the Arndale.

“He was initially arrested for serious assaults. He was taken into police custody and has now been arrested on suspicion of causing, preparation and instigation of an act of terrorism.

“We do not yet know the motivation for this terrible attack, it appears random, is certainly brutal and of course extremely frightening for anyone who witnessed it.

“We have arrested a man in his 40’s on suspicion of terrorism because of the nature and circumstances of this attack.

“This is bound to bring back memories of the awful events of 2017.

“At this time we do not believe that there is anyone else involved in this attack, but we will be constantly reviewing this.

“We have specially trained officers supporting those injured during the attack.

“We will have increased patrols, including armed patrols, in the city this weekend. This is to reassure people, we do not believe there is a wider threat at this time and we are hoping to return the city centre to normality by tomorrow morning.”