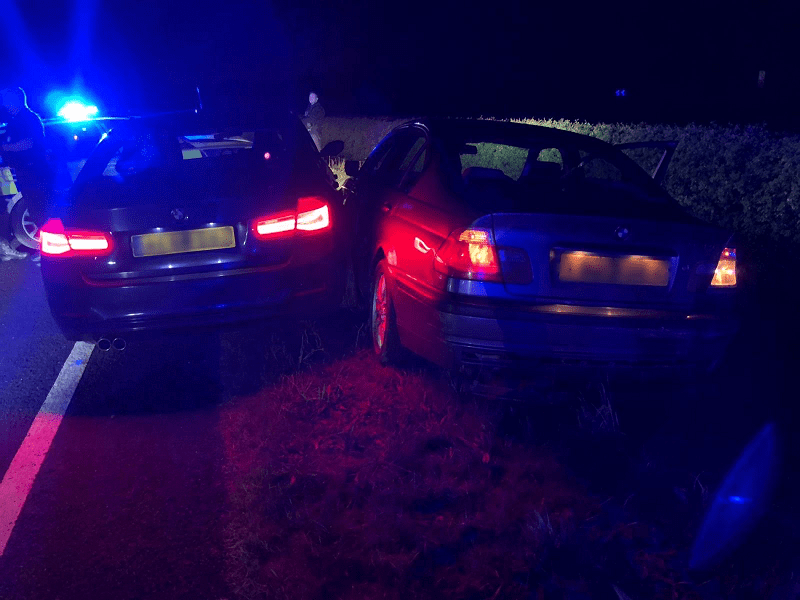 Five men have been arrested after a dramatic police pursuit on the A1(M) through North Yorkshire.

Officers spotted the suspected stolen car travelling south on the A1(M) at about 10.50pm. It did not stop for police, and made off at high speed. Specially-trained officers pursued it, deploying a stinger device, and it was eventually brought to a stop near Dishforth Village. Two police cars were damaged during the pursuit, which reached speeds of up to 110mph.

A North Yorkshire Police spokesman said: “Three people in the car were arrested at about 11pm: the 19-year-old driver, a 20-year-old man and a 16-year-old boy.

“They were all arrested on suspicion of theft of a motor vehicle and possession of a knife.

“The 20-year-old man was also arrested on suspicion of possession of cannabis.

“The 19-year-old driver was further arrested on suspicion of dangerous driving, failing to stop, drink driving and possession of cannabis.

“A few minutes later, another BMW, suspected of involvement with the first, was sighted by North Yorkshire Police officers on the A1(M). It was stopped near Wetherby without incident.

“The two men inside, aged 26 and 20, were arrested on suspicion of conspiracy to steal a motor vehicle.

“The men have been released under investigation, while enquiries into the incident continue.”