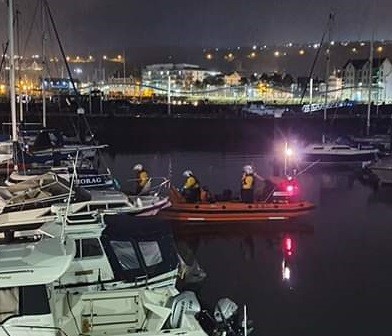 St Bees RNLI volunteer crew were paged at 10:30pm on Friday to go to the aid of a small vessel with engine failure close to the shore near Whitehaven Harbour.

The boat with two people on board was being dragged towards the rocks.

Conforming to the many challenges that make safely launching a lifeboat difficult during the COVID-19 crisis, the crew launched in under 20 minutes from being paged.

With the tide pushing the broken down boat nearer the rocks the RNLI crew quickly made their way to the vessel.

The small boat had deployed their anchor but the power of the tide was still dragging them towards a local landmark, Whitie rock, just north of the harbour.

On arrival at the vessel the lifeboat volunteers checked that both people on board were okay.

In the large swell that was making life uncomfortable for those onboard the small craft the lifeboat crew attached a towline.

They then towed the stricken vessel in to the safety of Whitehaven Harbour where they were met by members of the Whitehaven Coastguard Rescue Team.

The lifeboat then returned to the station to have everything disinfected and made ready for the next shout.

“They deployed their anchor to help them from being dragged onto the rocks and used a VHF marine radio to call for help as soon as they got into difficulties.

“This is however the third shout in recent months that our volunteers have been called to where lifejackets were not being worn.

“A lifejacket will save your life but is useless unless worn. Don’t wait until you are in difficulty before putting one on. The next casualty we get called to may not be so lucky.”