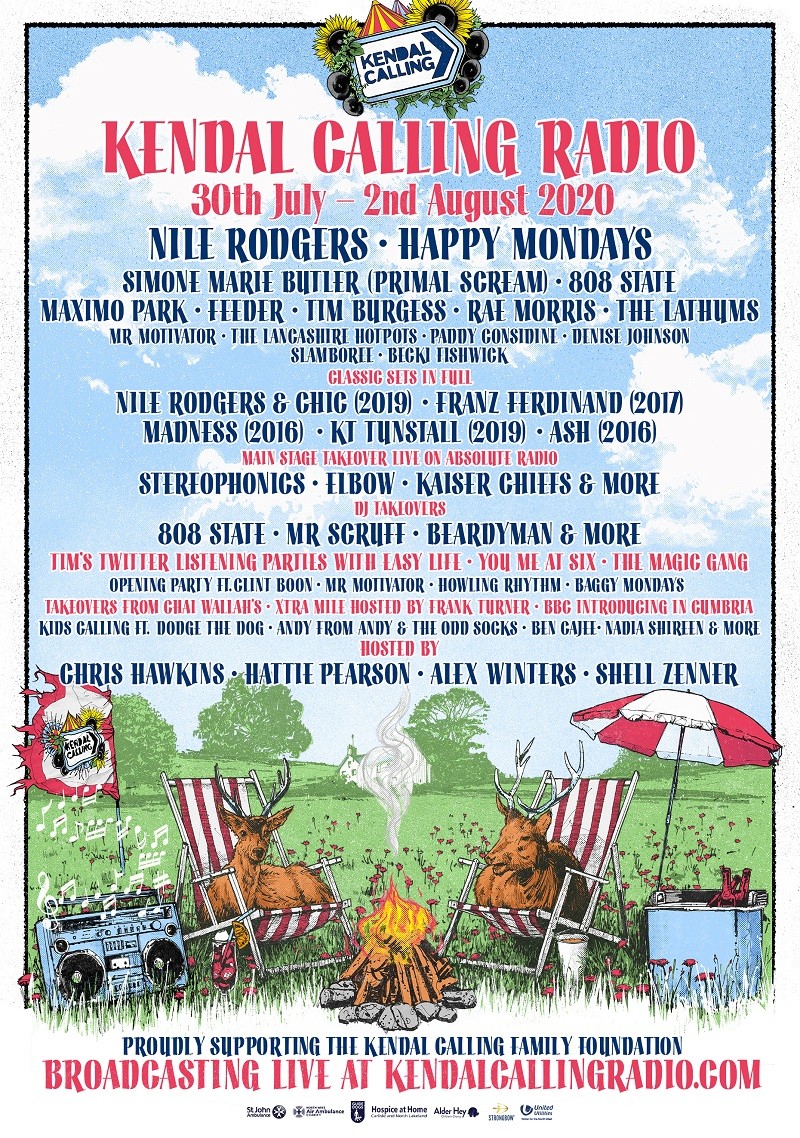 Kicking off at 5pm on Thursday 30th July through to midnight Sunday 2nd August, the sounds of Kendal Calling will be ringing loud with a rich snapshot of what has made Kendal a standout festival weekend for nearly 15 years. From incredible conversations, to festival memories of years gone by and interactive moments galore for fans to delve into – it’s the perfect accompaniment for a summer weekend.

Acclaimed children’s TV presenter Alex Winter hosts the Kids Calling Breakfast Show, the perfect way to start each and every day with a range of kids entertainment and shows for all the family to delve into. From the ‘Get Out Of BEDtime Story’ with Maximo Park’s Paul Smith, to morning Yoga, interviews, quizzes and more – expect the good and great of Kendal Calling and friends of the festival to be turning up in style.

Another long-standing friend of the festival, Tim Burgess and his Tim Peaks Diner has become an integral part of the Kendal Calling story. Whilst its doors may be closed for this year, Tim Peaks FM will be broadcasting an incredible programme of shows across the weekend – hosted by BBC 6Music’s Chris Hawkins and welcoming the likes of Simone Butler (Primal Scream), Paddy Considine, Happy Mondays, 808 State and more all popping by for chats, alongside feature session performances from fast-rising newcomers The Lathums and more! Delving into memories of the festival and much more, tune in from 12pm on Friday and Saturday for a welcome dip into Tim Peaks once again.

Tim Burgess isn’t done yet – with the phenomenon that is Tim’s Twitter Listening Parties kicking into gear with special listening parties across the weekend. Joined by Easy Life, The Magic Gang and You Me At Six – join the conversation online and tune in as each band chats through seminal releases for an audio/interactive experience celebrating amazing music.

More than anything, Kendal Calling Radio is a joyous ride through some of the best moments in Kendal Calling history. Join Hattie Pearson (Hits Radio) for the Best Of Kendal Calling, a show broadcasting on the Friday featuring festival memories and exclusive chats. The iconic Nile Rodgers will be dropping by to reflect on his landmark headline set with Chic in 2019, along with live tracks from the Kendal Calling, chats with Rae Morris, the legendary Mr Motivator and much more.

Ensuring the party continues in style, Frank Turner will be curating a special Xtra Mile Recordings Takeover – playing live and serving up some of his favourite new and established artists across an unforgettable two hours. Let’s not miss the return of The Lancashire Hotpots, a Kendal Calling institution, who will be delivering their unforgettable Sunday ‘pick-me-up’ magic on-air for ‘Sunday With The Hotpots’.

The festival weekend culminates with ‘The Kendal Calling Front Room Festival with Ross Buchanan’, a special one-off takeover on Absolute Radio on Sunday night, broadcasting full exclusive sets and highlights from some of the best moments in Kendal Calling history. With Stereophonics, Elbow, Kaiser Chiefs, Kate Nash and much more – the show promises to be the perfect Sunday night finale. With exclusive chats, competitions and more also planned, be sure to tune in from 8:30pm on Sunday 2nd August.

These highlights are just a snapshot of a weekend filled with unmissable shows. From charts running through the best moments in Kendal Calling history, feature archive recordings from the likes of Madness and Franz Ferdinand amongst others, a pumping late-night programme featuring the likes of 808 State and Mr Scruff, in-depth chats with festival founders Andy Smith and Ben Robinson and much more – Kendal Calling Radio rings loud with the sound of an unforgettable weekend broadcast to all.

Singer Denise Johnson, who was due to appear on this event, died last night. The festival will be including a tribute to her over the weekend.

Kendal Calling Radio is coming together to fundraise for the festival’s charity partners – North West Air Ambulance, Alder Hey Children’s Charity, Guide Dogs for the Blind, St John’s Ambulance and Hospice at Home. Listeners will be encouraged to buy from a range of limited-edition festival merchandise – including 2020 t-shirts and posters – and donate, with proceeds split between the five charities. Kendal Calling is releasing ‘15 Years of Kendal Calling’, a limited-edition vinyl album collecting 15 performances from the festival’s headline performances across the years. The album is now available to pre-order at kendalcallingradio.com, with proceeds benefiting War Child.

Each year the collective actions of the festival and its community raise many thousands of pounds to support the work of North West Air Ambulance, Alder Hey Children’s Charity, Guide Dogs for the Blind, St John Ambulance and Hospice at Home. As a result of the effects of the COVID-19 pandemic, these charities have seen their fundraising events cancelled and funding channels dried up. St John Ambulance, who voluntarily look after the Kendal Calling family each year and have been crucial in supporting the NHS over the last few months, have warned that they could run out of money in the next four months without support.