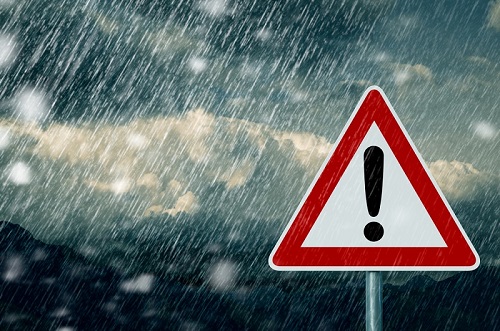 Thunderstorm warnings continue across much of the UK until Monday, 17th August, with a risk of impacts from heavy rain, flash flooding, lightning and hail.

The current hot weather creates ideal conditions for thunderstorms and Chief Meteorologist Paul Gundersen says; “Today warnings cover much of England, away from the east coast, Wales and parts of Scotland. The storms will be isolated but where they happen there will be frequent lightning, gusty winds and intense, heavy downpours with 30 to 40mm of rain possible in less than an hour and, in isolated spots, a small chance of 60 mm falling.

“With the continuing hot weather large swathes of the UK continue to be at risk from thunderstorms and potentially the impacts from heavy rain, into the early part of next week.”

Parts of central Scotland saw almost 7 hours of continuous thunderstorms overnight. The impacts from heavy, intense rainfall have been felt in many places, including Fife in Scotland, where an Amber warning was in place and a major incident was declared. Meanwhile, earlier this week homes and businesses were flooded in mid and west Wales.

“Environment Agency teams are working hard alongside local authorities to reduce the risk of flooding and keep communities safe, clearing grills and weed screens in areas which may be affected by heavy showers, and are ready to respond and support where needed. We urge people to check their flood risk, sign up for free flood warnings and keep up to date with the latest situation at Gov.uk, call Floodline on 0345 988 1188 or follow @EnvAgency on Twitter for the latest flood updates.”

Whilst many parts will see a good deal of dry weather, areas of thunderstorms are likely to continue to develop over parts of the UK on Wednesday, particularly later in the afternoon.

Many places will stay dry. However, where the storms occur they will be intense.

Most thunderstorms will die out during the evening though a few may continue in to the night.

Areas of showers and thunderstorms associated with a hot and humid air mass stranded across the southern half of the UK are expected to continue through Friday, and not solely during daylight hours.

Many areas encompassed by this warning will miss the thunderstorms altogether, but where they occur, heavy rain (20-30mm in an hour, and possibly as much as 50mm in 2 to 3 hours), frequent lightning, and in some places large hail are all potential hazards.

The greatest chance of impactful showers is expected to be in the southern half of this warning area, where afternoon showers are more likely to be slow moving and prolonged.

Areas of heavy showers and thunderstorms are expected to develop on Sunday, with some persisting into the late evening.

A similar day on Monday, though the thunderstorms more likely to clear earlier in the evening.

Many areas within the warning area will miss the thunderstorms altogether, but where they occur, the heavy rain (15-25mm) is expected in an hour, and as much as 40mm in 2 or 3 hours.

Thunderstorms are likely to be accompanied by hail , lightning and gusty winds.

A 68-year-old man died following a collision in South Cumbria on Saturday.