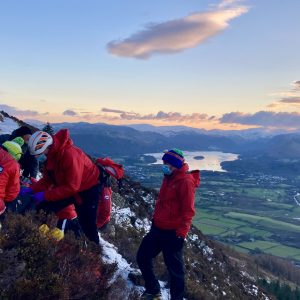 The first rescue of the new year for Keswick mountain rescue team involved a 20-year-old woman slipping on an icy path.

She was descending Carl Side (Under Skiddaw) towards Dodd and fell shortly after 3pm yesterday.

It resulted in a bad ankle injury and the casualty’s party dialled 999 and requested mountain rescue assistance.

Keswick mountain rescue team vehicles were able to access the forest roads up Dodd and it was only a short walk to the woman.

After providing pain relief the ankle was reduced and the casualty was stretchered down a narrow and awkward path to the team vehicles.

She was then transported to an ambulance waiting at the car park at the bottom of Dodd.

Fifteen team members were involved in the rescue which took two hours.

Going into the eighth round of the Quattro Group British Supersport Championship at Silverstone, Bradley Perie trailed the leading rider...