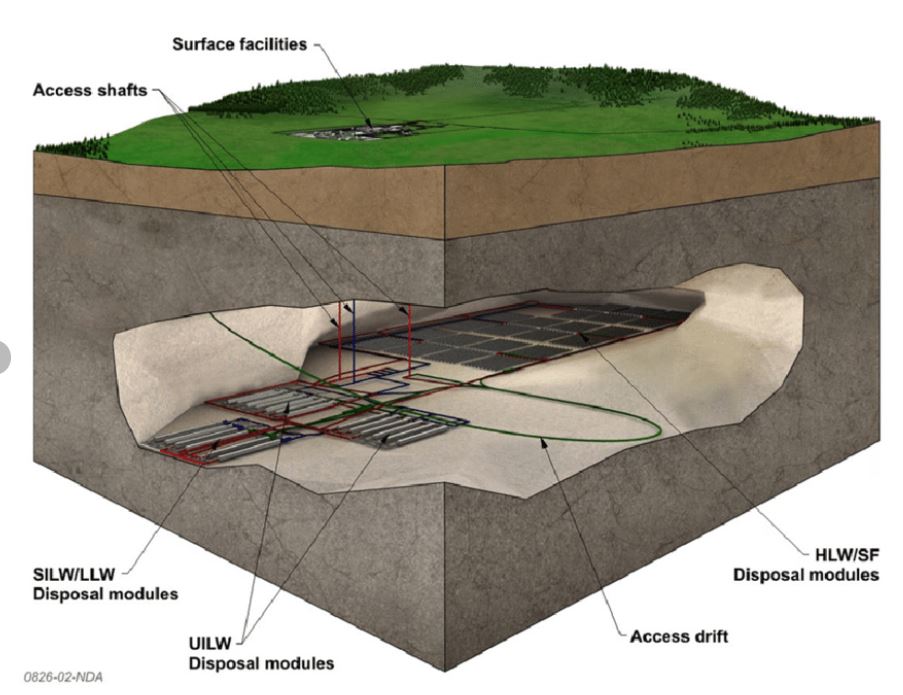 A group has been set up in Allerdale to begin the search for a site for an underground radioactive store.

The working group will engage with the local community to explore if there is a suitable site for the geological disposal facility in the area for higher activity radioactive waste.

It is the first stage of the search for a suitable site and to understand the views of people across Allerdale about possibly hosting a GDF.

It follows the formation of a GDF working group in Copeland in November.

The working group will include, among others, Allerdale Borough Council, Radioactive Waste Management (RWM), and private company GenR8 North Ltd.

A GDF will only be built where there is both a willing community and a suitable site.

A statement says: “Establishing a working group is just the starting point for engaging with people in a process that will take several years.

“No potential site has been chosen. This first step is about engaging with people across the community and beginning to understand their views.

“It’s about looking to identify both a search area for further consideration and the initial membership for a larger community partnership that could take the discussion further with RWM.

“If a potentially suitable site were to be identified by a community partnership in due course, then the community around that site will get to choose if they want to host a GDF.“

Jocelyn Manners-Armstrong, independent chair of the Allerdale GDF Working Group, said: “This is the beginning of a long process, and I want people to get involved from the very start to help to steer our way.

“A GDF in Allerdale could be a major boost to the area’s future prosperity and the skill base of its workforce.

“However, as a borough of outstanding natural beauty, with valuable habitats and cultural heritage, it’s also essential that any potential development doesn’t impact upon the things that make Allerdale a special place.

“That’s why it’s so important that the people of Allerdale have access to information, can ask questions and raise their issues and concerns before any decisions are made”

“I believe the working group needs a chair who is committed to making sure that people are heard and able to participate and engage.

“I’m passionate about protecting our natural environment, and also about the sustainability of our communities, so I look forward to starting this process and meeting local people.

“As independent chair it’s my job to challenge, ask questions and ensure the process is rigorous, transparent and evidence based.”

Mark Walker, director of GenR8 North Ltd. said “We came forward with a proposal to consider Allerdale and we’re clear that the national park must be excluded.

“We don’t have a specific site in mind, but as the UK is going to build a GDF, we believe West Cumbria should get the opportunity to host it.

“We’re just kicking off the process – any future decision needs to be based on accurate, factual analysis of the geological conditions, and crucially, should be taken by local people.

“I think we owe it to our future generations to deliver a long-term sustainable solution for this waste.

“It’s a legacy we simply have to deal with and surface storage as we have today, mostly nearby at Sellafield, is only temporary.

“We want to see how a GDF could help secure the long-term economic, skills-based regeneration of West Cumbria.

“We shouldn’t underestimate the potential a project like this could have, particularly around unlocking investment in infrastructure and the development of sustainable skilled jobs.”

Councillor Marion Fitzgerald, executive member, Allerdale Borough Council, said: “Allerdale’s participation in the working group is not a signal that the council has decided that a GDF should come here, that will be for the people to decide.

“What we do want is to make sure that our residents are aware of what a GDF coming to Allerdale could mean for them in terms of the potential benefits associated with this national infrastructure project.

“This is a long-term project that could deliver significant long-term benefits in terms of investment in infrastructure, jobs and skills, that is why it is so important that our community has an opportunity to be involved in the process.”

All engagement information can be found at:  https://allerdale.workinginpartnership.org.uk