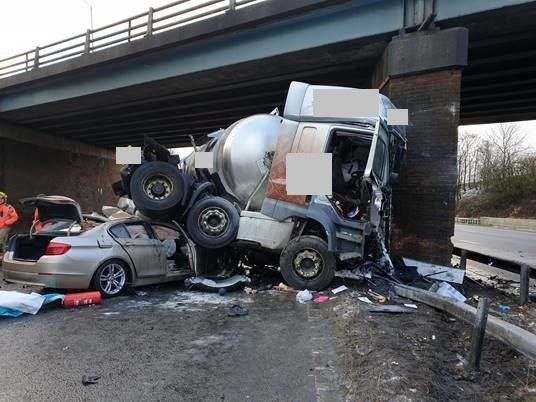 A Carlisle man has been praised by police for his quick thinking after a collision on the M6 at the weekend.

Antony Scott, of Coledale Meadows, is a driver for Amazon and was on his way to its depot in Manchester.

He was forced to swerve his car to avoid the incident, which involved a HGV and four vehicles on Saturday at Junction 27, near Wigan at about noon.

Antony, 31, leapt out of his van to see if he could help the people involved in the collision.

He climbed into the lorry’s cab to see what state the driver was in.

The door was jammed so he removed the window and found the driver trapped in his seat.

Antony said: “He had a huge gash just above his right eye and other injuries.

“Someone passed me a towel and I held it tightly on the cut to try to stop the bleeding.

“I wasn’t really thinking about time but it must have been about 10 minutes before the emergency services got there.”

North West Motorway Police sent Antony a message to thank him for his assistance.

In the message, they said: “What a very brave thing you did. Helping the driver in the way you did at the scene we are sure played a massive impact. It takes a lot of courage to do what you did.”

“It’s always my first instinct to help in these situations. I was just brought up that way.”

Antony said he was trying to keep the driver awake by reassuring him that he’d be okay.

The lorry driver was airlifted to hospital after the M6’s northbound lane was closed for the helicopter to land.

North West Motorway Police said the driver was in a serious but stable condition.

After the incident Antony, said he was shaken up.

He added: “My head was all over the place and I didn’t sleep very well that night.”

“I was so thankful to my amazing fiancee Heidi who was waiting at the door to give me a hug.

Antony also received a message on social media from a relative of the lorry driver, thanking him for his courage.

North West Motorway Police were approached for official comment, but have not responded.

Volunteer crew from the RNLI’s Barrow Lifeboat Station launched their inshore lifeboat following reports of a person in the water...