A mum is swimming 12 of the toughest lakes in the Lake District from end to end after being inspired by losing close friends to suicide.

Korrine Shaw, 28, has lost two friends to suicide in the last 18 months and is now hoping to spread the message that people shouldn’t suffer in silence and the benefits of coldwater therapy.

Korrine, of Barrow, said losing her friends was tough. “Obviously they came as a massive shock to me and my friends. We questioned what we had missed. It really makes you realise how many people can be struggling in silence and not everyone wants to talk,” she said.

“Coldwater therapy can be enjoyed by anyone at any time of year, in a group or on your own. I personally used it as an escape from my troubles in day-to-day life and over time realised the benefits.

“It is believed that cold water therapy improves your circulation, deepens your sleep, spikes your energy levels and reduces inflammation in your body. It is not a cure for mental health but studies show that cold water and open water swimming has helped alleviate symptoms of depression and anxiety.”

As well as being knocked for six by the deaths of her friends, she was also given the terrifying news that her four-year-old son had been diagnosed with a rare form of cancer.

“I found myself at a low point in my life where I struggled to see clearly and turned to my knowledge of open water swimming and cold water therapy to help clear my mind and get myself back on track,” said Korrine.

Last year she completed 214 wainwrights and swam in many tarns, waterfalls and lakes along the way.

Korrine is now halfway through her latest challenge, which is to swim each of the 12 swimmable lakes in the Lake District from end to end.

She has so far completed Grasmere, Rydal Water, Brotherswater, Wastwater, Buttermere and Coniston – racking up over 19km of open water – after starting the challenge just over a month ago.

Corrine still has Bassenthwaite, Crummock Water, Loweswater, Derwentwater, Ullswater and Windermere to tick off, with a combined distance of about 45km. She hopes to finish her challenge with Windermere at the end of October, a swim that will take her about nine hours.

“I hope that people who follow my journey can see my passion for this cause and understand the reason why I have taken on this challenge. If I can help one person then it will have been worth it,” she said. 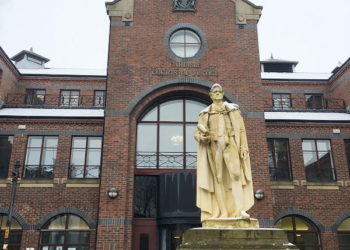 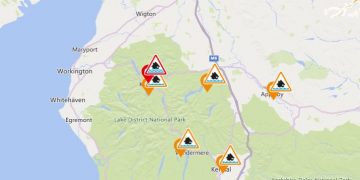 One flood warning and five alerts are now in force in Cumbria as rain continues to hit the county.