A team of Carlisle solicitors is to climb one of Cumbria’s highest mountains in the dark.

They have set themselves the challenge of summiting Blencathra at night to raise money for the Winter Warmth Appeal which supports elderly people who can’t afford to heat their homes.

The team of 12 includes the law firm’s five owners plus other solicitors, trainees and support staff.

“We are just hoping that the weather holds for us,” says Baines Wilson’s Head of Partnership, Sean Logue.

“There was a bit of apprehension when it was suggested. But we will be well prepared, we are familiar with the route, and we are really looking forward to it. If the weather is clear, it will be very beautiful at the top.”

They will walk just over eight miles, climb 869 metres and hope to complete the trek on December 9 in under four hours.

The Winter Warmth Appeal is run every year by Cumbria Community Foundation to help elderly people who may have to choose between heating and eating during the cold months. Around 300 older Cumbrians die each winter because they can’t afford to heat their homes adequately, says CCF.

Sean says, “We have raised £3,000 for the Winter Warmth Appeal over the past five years.

“It is a shocking statistic that several hundred people die each winter in Cumbria which I don’t think a lot of people are aware of. We want to support the elderly people in our communities who don’t always have a strong voice.”

Baines Wilson specialises in commercial law and is based at Kingstown in Carlisle, and in Lancaster.

The 36 staff are already seasoned charity walkers. During lockdown last year they took part in a virtual challenge to walk 2,448 miles, the length of Route 66 in the USA, raising £1,400 for Carlisle Youth Zone.

“We seem to love a walking challenge!” said Sean. 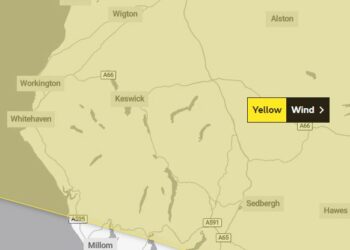 On the day that brought confirmation of a bad injury for Barrow’s Offrande Zanzala, an ex-Holker Street striker has also...