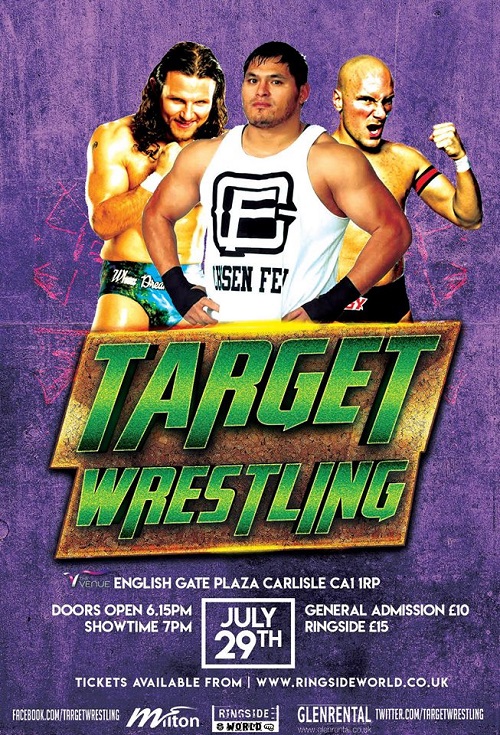 [T]arget Wrestling returns to The Venue in Carlisle on Saturday 29th July fresh on the heels of their most successful show to date.

Last month an incredible 400 wrestling fans from all over the country sold out The Venue and witnessed an amazing night of hard-hitting, high-flying action featuring the very best wrestlers from around the UK. Well get ready, because on Saturday 29th July, Target Wrestling are back with another blockbuster card and an atmosphere that can not be matched anywhere in the world.

Live and in action will be Lucha Underground superstar, one of the best heavyweight wrestlers in the world, Jeff Cobb! Cobb who plays “The Monster” Matanza in the hugely popular US Netflix wrestling show Lucha Underground will be coming to Carlisle for the first time ever and will be wrestling live on the show!

Cobb is not only a professional wrestler but a gifted amateur wrestler and even competed in the 2004 Olympic games in Athens representing his home nation of Guam.

Not only will Cobb be wrestling in the show but the current Target Tag Team champions and crowd favourites Polo promotions will be in action, as well as Martin Kirby and WWE UK Superstar Joseph Conners plus lots more still to be announced.

Ryan Devlin, Promoter of Target Wrestling said: “Last month was the biggest night we have ever had in our 4 year history, fans travelled from as far away as Kent to witness our show and experience the atmosphere that has the entire nation buzzing. We’re hoping to get another huge crowd in yet again and we promise a night that Carlisle will never forget! We have such a dedicated fan base who come to our shows, it’s like a champions league final every single month.”

If there are any tickets left on the day, these will be available for £12 on the door! All ages are welcome at this event.