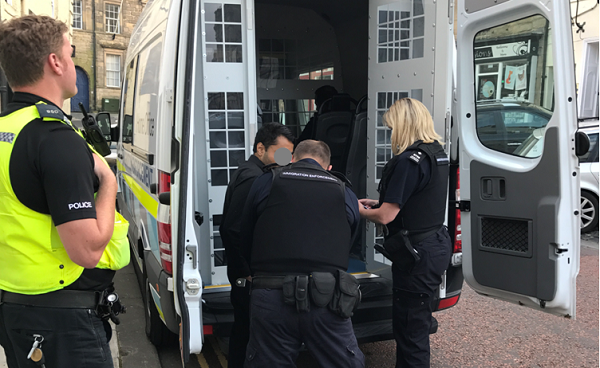 [A] business is facing a possible financial penalty and six people are detained following operations by Immigration Enforcement officers on Friday evening, 21 July, across Northumbria.

The visits, which were supported by Northumbria Police, were part of the ongoing Operation Kestrel which sees Immigration Enforcement working with the region’s three police forces to target foreign criminals and immigration offenders, as well as safeguarding any potential victims of trafficking or slavery.

Acting on intelligence, officers visited Miveshi Restaurant, Market Place, Alnwick, at about 6.50pm.  After carrying out checks, officers arrested four men from Bangladesh aged 27, 28, 32 and 34 who had all overstayed their visas.  All four were detained while steps are taken to remove them from the UK.

Officers also visited Merton Way Chinese takeaway, Merton Road, Ponteland at about 10pm.   A 31-year-old Chinese man who was found to have overstayed his visa was ordered to report regularly to Immigration Enforcement while his case is progressed.

At about 11pm, officers visited China Cook, Waterloo Road, Blyth.  A man aged 48 and a woman aged 32, both Chinese nationals, were arrested.   The woman had overstayed her visa and the man had entered the UK illegally. Both are detained pending their removal from the UK.

A further business in Berwick was visited but no arrests were made.

Miveshi Restaurant has been served a referral notice warning that a financial penalty of up to £20,000 per illegal worker found will be imposed unless the employer can demonstrate that appropriate right-to-work document checks were carried out, such as seeing a passport or Home Office document confirming permission to work. This is a potential total of up to £80,000.  There was no evidence that the individuals arrested at Merton Way or China Cook were working and so neither business was issued with an illegal working financial penalty.

David Harris, Immigration Enforcement assistant director, said: “This operation is an excellent example of the work my officers do to tackle those who flout  immigration laws – either by employing those with no right to work or remaining in the UK when they have no permission to do so.  Officers across the North East are also continuing to support Operation Kestrel, through which law enforcement organisations are using the combined weight of their powers to tackle issues which cut across all areas of their work.

“Illegal working is not harmless – it cheats the taxpayer, negatively affects the wages of lawful workers and allows rogue employers to undercut legitimate businesses.

“All of our operations are intelligence led and I would encourage people with detailed and specific information about illegal immigration to contact us.”

Information to help employers carry out checks to prevent illegal working can be found at https://www.gov.uk/government/collections/employers-illegal-working-penalties. This includes a new quick answer right-to-work tool to help employers check if someone has the right to work in the UK.

People with information about suspected immigration abuse can contact https://www.gov.uk/report-immigration-crime or call Crimestoppers on 0800 555 111.