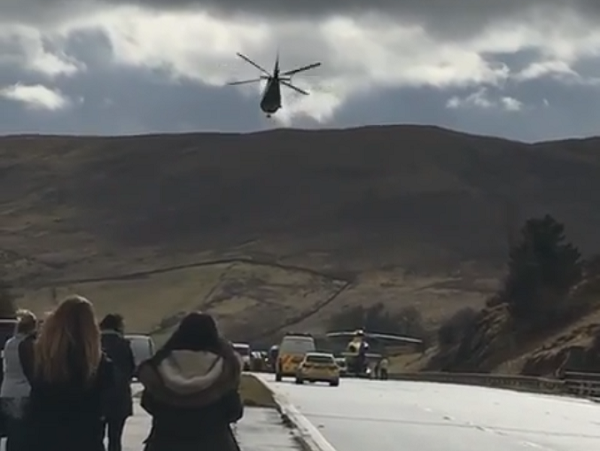 [A] woman has died following a multi-vehicle road traffic collision on the M6.

At 1.55pm today (28 March, 2018), Police received reports of a road traffic collision on the northbound carriageway, one mile South of Tebay.

At the same time a separate collision occurred on the southbound carriageway, at the same location.

“A male was airlifted to Preston Hospital with serious injuries.

“Despite treatment at the scene, a female passenger in one of the vehicles has died.

“The M6 was closed in both directions for a short time to allow the air ambulance access to the scene and protective barriers to be placed on the carriageway.”

“He had sustained multiple injuries and was critical on arrival.”

A spokesman for Cumbria Fire and Rescue Service said: “At 2pm firefighters were called to reports of a multiple vehicle collision between Junctions 37 and 38 of the M6.

“The casualties were passed to the ambulance service.

“Firefighters were at the scene for around 40 minutes.”

The northbound carriageway remains closed whilst an investigation is commenced but the hard shoulder has been temporarily opened to allow the release of vehicles stuck in the tailback.

The road will remain closed for several hours. A northbound diversion is in place from Junction 36, along the A6 to Junction 39.

Police are appealing for anyone who may have witnessed the collision or was travelling in the area at the time with dashcam footage to contact PC1439 Latham of the Roads Policing Unit at Kendal and quote log number 109.

For up-to-date information on the roads visit https://www.cumbria.police.uk/Traffic/Traffic.aspx

Diversion for the northbound is hollow diamond

Diversion will take you to J39 via:
Exit J36 , take A590 westbound to Brettargh Holt junction
Follow A591 to Plumgarths Roundabout, Take third exit, A5284 to Kendal
Follow A5284 Windermere road / Stricklandgate, turning left with all traffic onto A6 Sandes Avenue.
Follow the A6 northbound out of Kendal towards Shap Toll Bar junction
At Shap Toll Bar junction turn right onto the B6261 and turn left at M6 J39, Shap.

Please allow extra time for your journey this afternoon.

Watch the video which aims to tempt visitors back to Cumbria

A second neighbour has told a jury he saw “shadows” involved in an apparent violent disturbance just inside a Carlisle...

Watch the video which aims to tempt visitors back to Cumbria