A Christmas Carol comes to Whitehaven 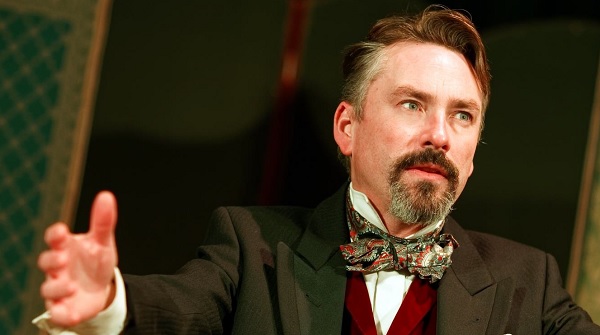 Celebrating the 175th anniversary of the publication of Charles Dickens’s A Christmas Carol, European Arts Company return with their authentic and refreshing adaptation of this timeless tale.

Tom Paris’s design welcomes audiences into Dickens’s intimate study, a warm inviting environment full of festive cheer and hidden surprises. The set is based on Dickens’s own London rooms and takes inspiration from a rich tradition of Victorian illusion, imagination and early theatrical trickery.

Few people know that Charles Dickens originally wanted to be an actor and A Christmas Carol was the first public performance he gave of his own work. After his opening night he said The success was most wonderful and prodigious – perfectly overwhelming and astounding altogether! Dickens enacted the work over 150 times and the effect on the public was phenomenal; he had a magnetic stage presence, riveting eyes, expressive voice and wonderful powers of characterisation. Remarkably, Dickens made more money from his readings than all his novels and stories put together. This exciting production, adapted from Dickens’s own public reading scripts and eyewitness accounts of him on stage, recreates the spirit of Dickens’s original performances.

John O’Connor is an engaging and charismatic performer, slipping deftly between the characters, aided by little more than some smartly used sound effects and tight direction from Peter Craze. … O’Connor’s performance is a delight. A festive treat (The Stage). ★★★★

Actor, John O’Connor lives in Rochester where Dickens grew up and set many of his stories including Great Expectations, David Copperfield and The Mystery of Edwin Drood. O’Connor says, I’m delighted to be touring again in A Christmas Carol. Dickens himself toured all over the UK and America performing the tale and it is wonderful to follow in his legendary footsteps. He described his imagination as ‘a Magic Lantern’ and we use an original Victorian magic lantern in the show to help illuminate the story.

Is Solfest still going ahead in 2021?

Dickens was passionately interested in the welfare of the poor and children in particular and many of his early readings were for charity. Doctor Thomas Barnardo was a contemporary of Dickens and was inspired to set up his first Ragged School partly as a result of Dickens’ writings and campaigning. This tour is in aid of the children’s charity Barnardo’s.

This Christmas, you can experience what it must have been like to be in the audience in the 1860s. Come and enjoy a seasonal treat in the spirit of Christmas past, present and future.

A Christmas Carol will be performed at the Rosehill Theatre, Whitehaven, Cumbria, on 13th December.

Watch England v Scotland in Euro 2020 on the big screen

Delve into the gruesome world of Medieval medicine