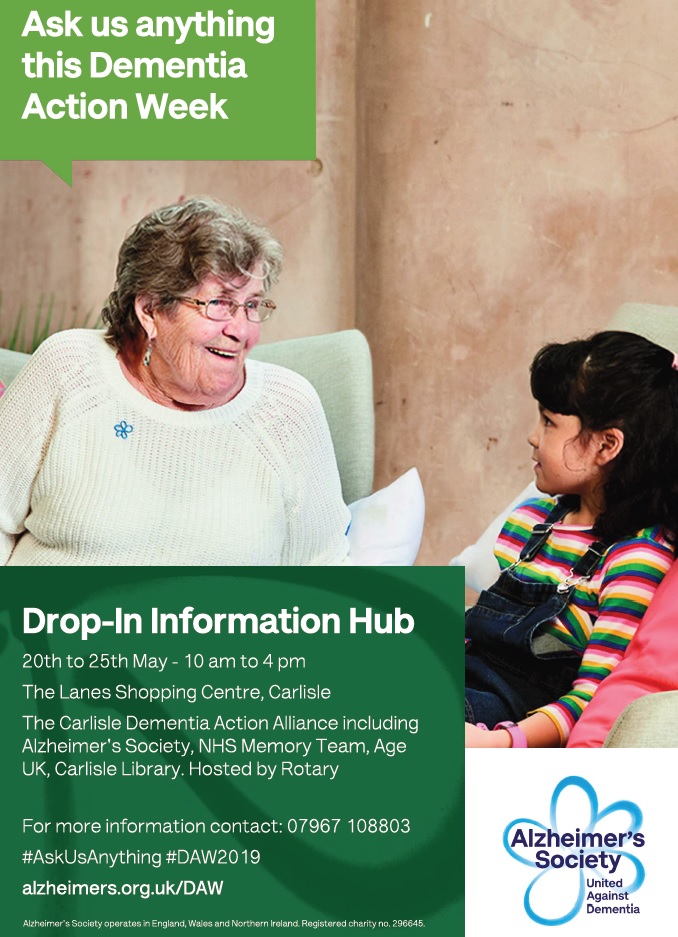 With support from the Lanes Shopping Centre in Carlisle the Dementia Friends sessions will be held each morning and afternoon during the week in one of the former Hawkins Bazaar shop unit.  In addition, there will be sessions on some lunch times.   The training sessions are being provided by locally based Dementia Champions.

Representatives of the Alzheimer’s Society, the NHS Memory Team, Age UK( Carlisle & Eden) and the Alliance will be on hand during the week to provide advice and support to individuals and organisations.

The Alzheimer’s Society will be bringing their local Singing for the Brain group to The Lanes and they will be performing on Thursday 23 May at 2pm outside Pandora on the crossroads of Globe and Peascod Lane.

Speaking at the launch of the highly emotive film “Hide & Seek” at Tullie House on the 14th May, Kevin Walsh, Chairman of the Dementia Action Alliance, and a member of Brampton & Longtown Rotary Club who are hosting the week, said:  “We know that in the coming years many more people will be diagnosed with Dementia.  Alliance members are keen to make sure that organisations and individuals are as prepared as they can be.  By taking steps now we can ensure that Carlisle is as dementia friendly as possible for those who wish to work, live and play in the area.

“We aim to show the film “Hide & Seek” and arrange dementia friend’s awareness session across the city and wider area so that more people can understand what it means to live with and support those living with dementia.”

Peadar Sweeney said: “We hope the film will help to raise more awareness about the condition and the impact it has on so many families. During the shoot the family of the young actress Isobel Hamilton were helping her Grandfather move from hospital to a home specializing in caring for people with dementia. It was very poignant.”

A man has lost over five stones thanks to an NHS-endorsed weight loss plan.