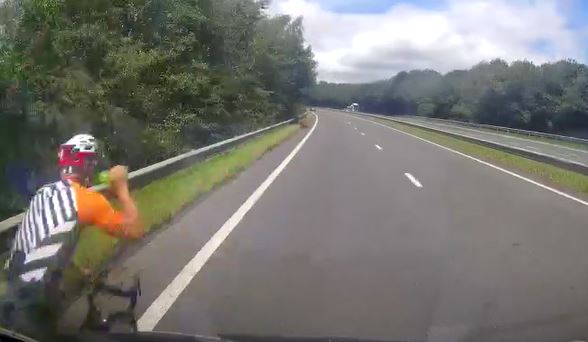 A cyclist was stuck by a van at 70mph and knocked unconscious in an incident which highlights the need for all motorists to give cyclists space when passing.

He was between the junction 36 interchange with M6 and the Brettargh Holt roundabout when he was struck by a Mercedes Sprinter van passing too close.

The van struck the cyclist’s right elbow before a second impact between the cyclist and the wing mirror.

The cyclist was knocked from his bike, landing in the carriageway, where he lost consciousness.

Police Constable Simon Smith said: “As the van approached the cyclist, the driver made no attempt to slow down or make adjustments to his course.

“The cyclist suffered serious injuries as a result of the collision. Thankfully there was an off-duty constable from Lancashire and an off-duty fireman from Cumbria Fire and Rescue Service were quickly able to come to the man’s aid.”

The cyclist suffered a fractured elbow and numerous lacerations and contusions covering the length of his body and face. He was also left with no memory of the collision.

The westbound carriageway was also closed for around two hours following the collision.

The driver of the Sprinter van, Christopher Gadsden, 30, of Methuen Street, Walney admitted driving without due care and attention. Carlisle Magistrates’ Court imposed six penalty points on 17 September 2019 and he must also pay a total of £350 in fines and costs.

Drivers are urged to give cyclists at least 1.5m of space when passing to help give cyclists room to take action if they come across a pothole or any other obstruction, without putting themselves at risk.