A MAN has admitted trying to kill one man and wounding another during a daytime Cumbrian market town centre knife attack.

Richard Moulton, 50, was told by a judge this afternoon (FRI) he should expect a lengthy jail term for injuring three people – two seriously – at King Street in Wigton on July 31.

One man was stabbed in the chest, another was knifed in the stomach and a woman was also hurt by a blade during an apparently random early afternoon attack.

Parts of the town were locked down and cordons were put in place as police began an investigation and paramedics treated the casualties who were also helped in the immediate aftermath by members of the public.

At Carlisle Crown Court, Moulton admitted attempting to murder Peter Ostle and wounding Thomas Ismay with intent to cause him grievous bodily harm. Moulton – who appeared in court over a video link bald-headed and wearing a grey sweatshirt – also pleaded guilty to assaulting Gillian Lloyd, causing her actual bodily harm.

Judge James Adkin adjourned the case for the preparation of a probation service pre-sentence report which, he directed, should assess the possible risk posed by Moulton of causing serious harm to the public in future.

Judith McCullough, defending, revealed of Moulton’s offences: “The defendant has little or no recollection of what occurred on that day.”

Moulton, previously of Redmayne Court, Station Road, Wigton, was remanded in custody and will receive his punishment on November 29.

Judge Adkin told him: “Inevitably you should expect a long custodial sentence.” 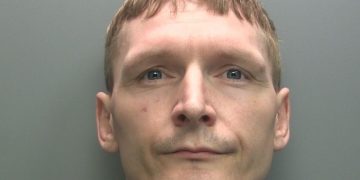 Cumbria police wants to trace a man who is wanted on suspicion of breaching his court bail.