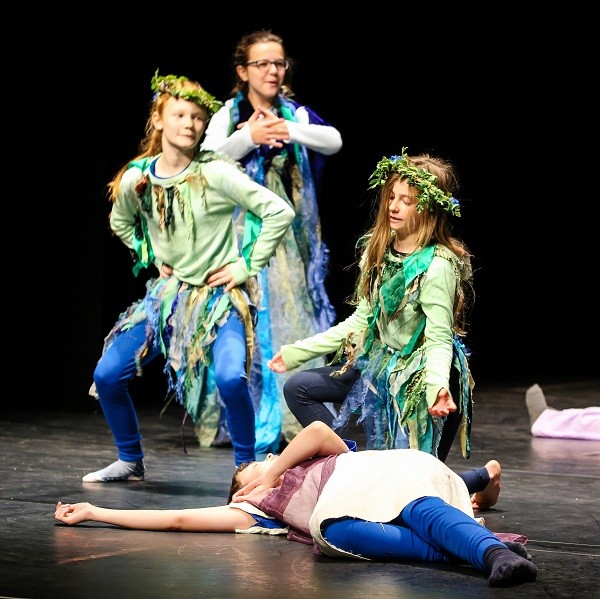 On Wednesday 13th November Grasmere CE Primary School took to the stage at Theatre by the Lake to perform Shakespeare’s A Midsummer Night’s Dream (although the title was changed to ‘winter’ in light of the current season) in a dazzling performance that was a spectacle to behold.

The play is markedly different from Shakespeare’s other comedies, as it consists of several interwoven plots; each carrying as much weight as the others, though dealing with sharply contrasting characters: the wedding of Duke Theseus of Athens and Hippolyta (though reduced to a voice-overs in the opening sequence here); the intricate relationships of Lysander, Demetrius, Hermia and Helena; the quarrel between Oberon, the King of the Fairies, and his Queen, Titania; and a group of workmen and am-dram enthusiasts, dubbed ‘The Mechanicals’, who are to provide entertainment for the forthcoming nuptials of Theseus and Hippolyta. 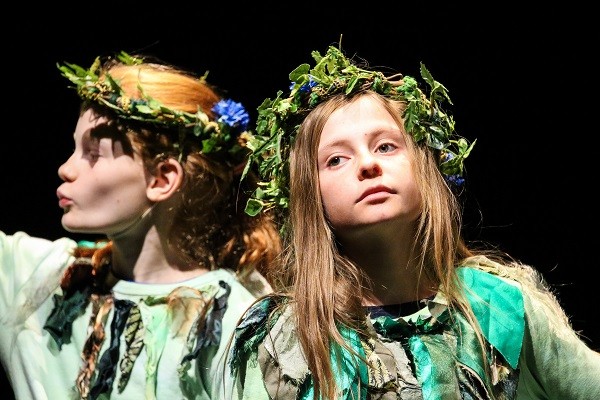 There is a wonderful energy created between Lysander (Sam Arundale), Demetrius (Samuel Street), Hermia (Ellen Dickson) and Helena (Lily Benson), as we follow their romantic entanglements, brought on by Hermia’s domineering father, Egeus (played with great conviction by Jake Leech-Sanders, in one of several roles.) Each of ‘the four lovers’ convincingly leads the audience through the confusing tumult of events; the frustrating misfortunes to which love is the subject; the chaos and catastrophe; the theme of unrequited love; the distress. But once each character is under Cupid’s influence, each actor provides numerous comedic moments that bring the play back from the brink of tragedy; ‘The course of love never did run smooth’.

The Athenian workmen- Quince, the carpenter, Bottom, the weaver, Snug, the joiner, Flute, the bellows-mender, Snout, the tinker, and Starveling, the tailor- assemble under Quince’s direction to stage a tragedy for the Duke’s wedding. Liam Gaskell, (revelling in the role of Quince) provides the audience with genuine belly-laughs as his character attempts to control the domineering Bottom (played superbly deadpan by Mason Smith) and rally the rest of his workmates and fellow cast members, as they bumble through rehearsals. The rest of the group, despite Bottom’s best efforts, have their opportunities to shine: Ophelia Almond (Snout) and Orla Sharkey (Starveling), hilariously portray ‘the wall’ and ‘the moon’ respectively in the play-within-the-play; Snout, (played with charm and pitch-perfect vulnerability by Alfie Almond) is worried about line-learning and being too convincing as a lion, in case he frightens the ladies in the audience; and Oli Andrews (Flute) is given the female part of Thisbe in the Mechanicals’ ‘tragedy’, which greatly irks him as he ‘has a beard…coming’. These young actors show great skill in portraying these hapless characters who have no understanding of dramatic illusion, but are amusingly full of self-confidence about their own abilities. Joyous!

In the fairy world, Niamh Reardon shows great stage-presence as Oberon, King of the Fairies, who cruelly has his Queen put under a love-spell. Tiana Purcell, who portrays the aforementioned Queen, retains a dignified and graceful aura, even when she is under a spell that convinces her she is in love with the half-human/ half-ass Bottom (who himself has become the butt of a practical joke). Her fairy attendants (Olivia Hill, Connie Hicks, Maisie Chambers and Elitsa Ivanova) do a marvellous job of simultaneously feigning courtesy to Bottom and showing the audience their abhorrence towards this creature.

Last, but by no means least, is the capricious and mischievous character of Puck, shared between four actors; quite literally demonstrating the split-personalities of this character: Alice Robinson looks born to play the part and well-suited to the costume, adding lots of her own little nuances to the character; Sarah Dixon utilised a background in dance to give a certain majestic quality to Puck; Jake Leech-Sanders and Vitto Zavaglia definitely brought the animated, wilful scamp attributes- like a pair of naughty non-identical twins.

Overall, this was a lively, impressive and polished performance by an ensemble cast who not only demonstrated an ability to recite Shakespeare with volume, clarity and conviction, but understood every word and conveyed that meaning to the audience too. Exceptional!

A note of thanks must also be given to the staff at Theatre by the Lake, Shakespeare for Schools Foundation, the parents of Grasmere children, past and present, who created the wonderful props and costumes, and the one in particular who can constantly be relied upon to meet the in-house sound-recording requirements.