The smell of marshmallows toasting on a campfire, a singalong and giggles with friends and a night under canvas – many young members of Girlguiding Cumbria South thought that they would have to do without these delights during the current crisis. However, their leaders had different ideas and invited them to a virtual camp. Over 500 Rainbows, Brownies, Guides and Rangers aged four to eighteen, and their leaders, hugely enjoyed their camping experience with a difference.

They put up proper tents in gardens, make-belief tents under kitchen tables and built dens with blankets and pillows in various corners of their homes so they could join in the giant sleepover whilst still following the social distancing guidelines. They came from all parts of South Cumbria, but also from across the UK and even Australia.

They did all the things you would expect from a traditional Girlguiding camp – eating eggy bread for breakfast, holding midnight feasts, completing a whole range of challenges, some sensible, some silly, and preparing and cooking their own meals.

Activities ranged from the crazy balance challenge, building miniature gardens and saying their promise virtually, including in sign language. One of the highlights though was a hugely popular virtual singalong via Zoom, where everyone had the chance to request songs and shout outs. The young members’ imagination knew no limits: many girls created virtual pets to camp with them whilst others followed Cumbria fire and rescue services advice about garden fires and built pretend ones instead out of wood and brightly coloured paper.

All the communication was handled through social media which also allowed several high-profile guests to drop in, including Julie Barton, the High Sheriff of Cumbria. She happily recalled her camping experiences, as a Guide from Ulverston, including the time she was washed out of her tent on a very rainy camp in Scotland. Grasmere-based Storyteller Laureate Taffy Thomas delighted everyone with a tale from China which shows how honesty and patience get rewarded in the end and Julie Bell, Girlguiding’s Deputy Chief Guide, sent a video to wish everyone a happy virtual camp.

Many of the girls’ families joined in as well, something that wouldn’t normally happen at a real camp, and after the closing song ‘Go well and safely’ the following post by parent Katrina Greenbank perfectly summed up the event: “My girls absolutely loved it. Midnight feasts, singing and sleeping bags – what more could you wish for? Thank you!” 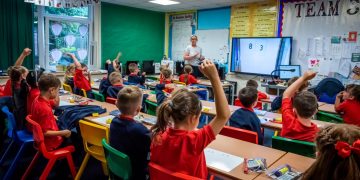 A unique education project in West Cumbria to improve education in the area will continue.