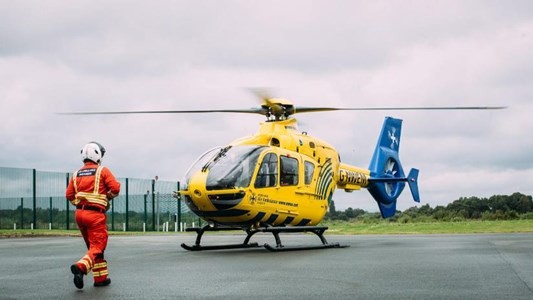 In May 1999, the North West Air Ambulance Charity (NWAA) took its maiden flight from Blackpool Airport. Since then, the charity has completed over 22,000 missions, making a difference to thousands of lives across the region.

In 21 years, the service has grown from one helicopter to three, launched four rapid response vehicles and opened a second airbase in Barton. All along it has been supported by the generosity of donors, fundraisers and volunteers across the North West.

On call 365 days a year, the NWAA crew work tirelessly to bring the hospital to the patient. The service is entirely charity-run, depending on public and corporate support to complete its lifesaving missions, as it does not receive government funding.

Alice Roberts, 24, Lancaster, is one patient who credits NWAA with saving her life. In 2010, aged 14, her horse bolted and collided with a Land Rover, landing on top of her. NWAA attended the scene, providing pre-hospital care before airlifting Alice to hospital. Her family have since been keen supporters of the charity, raising vital funds and awareness.

“There’s no doubt the North West Air Ambulance Charity saved my life. My injuries included a fractured pelvis, clavicle and ribs, a ruptured diaphragm and a torn liver, stomach and kidney. Without the care they provided so quickly at the scene, before airlifting me to the Royal Preston Hospital, it’s unlikely I would have survived.

“Ever since my accident, my family and I have organised lots of different events to raise funds for the charity – my brother even ran an ultramarathon! We’ve raised over £10,000 in total, and it’s all worth it, the crew are literally lifesavers. You don’t need to be as crazy as my brother as anything you can do, no matter how big or small, makes all the difference, and means the charity can continue saving lives for so many more years to come.”

One young supporter wishing the charity a happy birthday is 9-year-old Billy Hardisty, from the Lake District, who has so far single-handedly raised £435 by taking part in a 21-hour sponsored silence. Billy was inspired to fundraise to say happy birthday to the charity: “I am really proud to have helped raise money for the air ambulance charity. It’s a hard time for them, but they are still saving lives and making things easier for people, so I wanted to say happy birthday and thank them for their work.”

Heather Arrowsmith, North West Air Ambulance Charity CEO, celebrated Elizabeth and all those who have made 21 years of service possible: “I want to say a heartfelt thank you to everyone who has supported our charity over the years. In this time our charity has made a truly lifesaving difference to our community, thanks to the hard work of our crew, our team at HQ and volunteers, and the incredible generosity of our fundraisers and donors. Supporters like Billy make all the difference to our work. It takes over £9.5 million a year to remain operational, and we simply wouldn’t be here without this support.

“Our charity’s mission is to improve outcomes for patients all across the North West, whether someone needs a blood transfusion by the side of the M6, has gotten into difficulties up in the Lakes or has suffered a heart attack at home. By swiftly bringing the hospital directly to the patient, our crew can make the difference between life and death. Patients like Alice really drive this home – and we’re so grateful to all those who have allowed us to carry out this work since 1999.”

To celebrate its 21st birthday and raise urgent funds, the service is calling on people to take on a new challenge: Go21! Challengers can choose any activity to help raise funds and awareness – whether that’s completing 21 laps of the garden or running 21 miles over 21 days…