Virtual concerts in aid of Hospice at Home 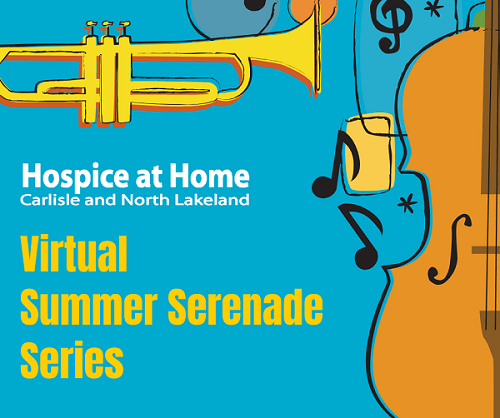 Hospice at Home Carlisle and North Lakeland want to invite you to their next virtual fundraising event. The Summer Serenade Series features a wonderful programme of musical evenings, to be enjoyed from the comfort of your own home.

The Series, organised by longstanding Hospice at Home supporter Linda Bainbridge, will feature a variety of musicians, many of whom have supported the Charity in the past at musical events throughout the county.

The first concert will be premiered on Saturday 13th June at 8pm. It will feature performances by Michael Cave, Michael is a retired cardiologist living in Durham. He began playing flute at the age of 9 and was principal flute in the Irish Youth Orchestra from 1976 to 1980. He then stopped playing for about 20 years to concentrate on studies, career and family life, but now plays in various groups including the Cobweb Orchestra, Orchestra North East, Cleveland Philharmonic Orchestra, European Doctors Orchestra and World Doctors Orchestra. He has been a guest soloist in fundraising concerts over many years, including two concerts in 2019 to support Hospice at Home. He passionately believes in the power of music to promote wellbeing, and to bring people together in a divided world.

Tickets for the event are available by making a donation of your choice through the Summer Serenade Series JustGiving page at www.justgiving.com/campaign/VirtualSummerSerenade

The suggested donation for each concert is £10 per person, however every pound you are kindly able to give will make a huge difference to the Charity during these difficult times. Once a donation has been made to the JustGiving, a weblink will be sent to the guest which will enable them to view the concert at the scheduled time.

Cath Coates, Fundraiser for Hospice at Home, said “During these unprecedented times our supporters, such as Linda and her team of musicians, are really going above and beyond for the Charity and we are greatly looking forward to these musical occasions. We would like to say a huge thank you to all of the performers for sharing their wonderful talents with us and our supporters.

Supporting local patients their family and carers is at the heart of everything we do and will always remain so, even during this period of uncertainty. Our nurses are there for people at their most vulnerable and give comfort and reassurance when it is most needed. We hope you are able to join us for The Serenade Series, which will ultimately enable us to continue providing this vital support.”

Hospice at Home Carlisle and North Lakeland needs to raise 80 per cent of its annual running costs which equates to approximately £20,000 each week and this couldn’t be achieved without the kindness of the local community, businesses and organisations  For more information visit www.hospiceathome.co.uk or telephone 01768 210719.