Lakes’ very own edition of Monopoly heads for Christmas No 1 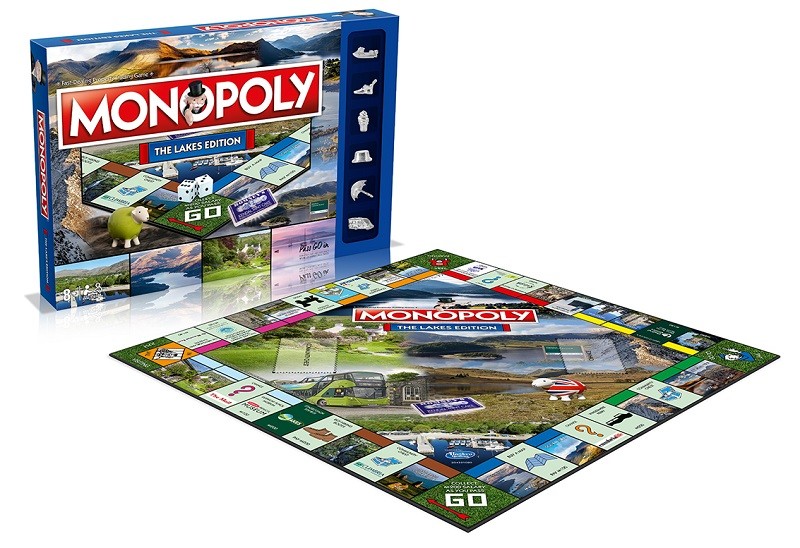 The Lakes’ very own official version of MONOPOLY is all the rage and is heading for the Christmas No.1 – a full three months ahead of Yuletide.

The edition hit the shops in the early summer during lockdown and now the game has gone on a SECOND print run with a third not being ruled out. “It’s all the rage,” says the sales boss at Winning Moves UK, who have produced the official game. “The game brings The Lakes to the world at a time when the world can’t visit there. Sales both locally and overseas have been phenomenal.”

And just like pop icon and Lakes fan Taylor Swift, who last month released a record dedicated to The Lakes in general and Windermere in particular, this official version of the world’s most popular board game is on the brink of being a chart topper too.

Kay Thompson, Head of Retail at Winning Moves UK – who have produced this game – adds: “The game was released in June during lockdown and proved the perfect ‘play at home, stay at home’ gift, as we sold out completely to retail within a few weeks. We thought when it was released that there would be enough games in the shops to cover this Christmas, but we have now had to go on a rapid second print-run. A third one is a possibility too.  If demand is anything like it has been, then come Christmas Eve it may well be that the only games left will be those on Santa’s sleigh!”

Ms Thompson explained sales have been not just regional but global.

She added: “As everyone knows The Lakes is an international tourist hot-spot and whilst this year it has been pretty much locked down to the world the MONOPOLY game dedicated to the Lakes has flown all over the globe. So maybe it’s a case of ‘If you can’t visit it, then play it’.

“Ironically one overseas fan – pop icon Taylor Swift – has just dedicated a song on her new album to Windermere after a reported visit there in 2012. Ms Swift, who has sold out to stadiums all over the world over the years, clearly has a place in her heart for Windermere and The Lakes and she will surely be delighted too to learn that Windermere has grabbed the top Mayfair spot on the new board.”

The game boasts more twists and turns from the game’s classic MONOPOLY London original than, well, a typical Lake District road as the PROPERTY SITES, the CARDS and the TOKENS get a Lakes flavour and feel:

“This special official edition is a celebration of – and in effect a Love Letter to – The Lakes,” adds Ms Thompson from Winning Moves UK – who are producing this game under official license from the MONOPOLY brand, owned by Hasbro.