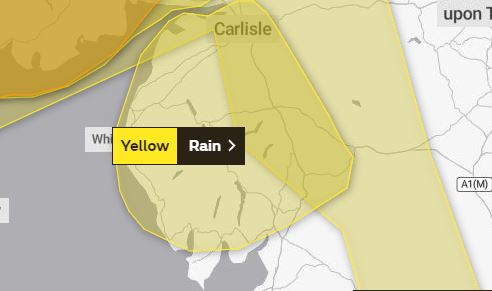 Heavy and persistent rain and high winds forecast for today have prompted a weather warning for Cumbria.

The Met Office has issued a yellow weather warning and said flooding of a few homes and businesses is likely and spray and flooding on roads  would probably making journey times longer.

It added: “Rain will become heavy and persistent during the course of today, easing and clearing south-eastwards into Wednesday morning.

“Widely 30mm to 60mm of rain is expected across the warning area with locally 120mm over some high ground.”

Derwentwater’s level remains high as a result of heavy rainfall over the past weekend.

Flooding is expected to affect low lying land and roads in the Seatoller, Stonethwaite, Rosthwaite, Grange-in-Borrowdale and Derwentwater shoreline areas.

High river and lake levels are possible on the River Derwent, Stonethwaite Beck, Watendlath Beck, Derwent Water and their tributaries.

A flood alert has also been issued for the rivers Brathay, Rothay and Winster.

Windermere’s level remains high as a result of heavy rainfall over the past weekend.

Avanti has cancelled trains to Scotland and is running an hourly service between Preston and Carlisle due to the forecasts. More information here.