South Cumbrian cinemas getting ready to open at last! 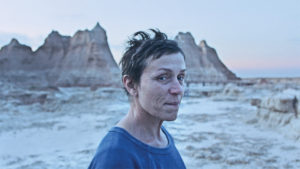 Two South Cumbrian cinemas are getting ready to open their doors again this month.

The Royalty Bowness and the Roxy Ulverston will be back in business on Monday 17th May.

In the first few days both cinemas will be showing Peter Rabbit 2 and Nomadland. Peter Rabbit 2 has more adventures for the mischievous rabbit, voiced by James Corden, to the frustration of Mr McGregor (Domhnall Gleeson) and Bea (Rose Byrne).

Winner of three Oscars, Nomadland stars Frances McDormand who, after losing everything in the recent recession, embarks on a journey through the American West in her camper van.

The Royalty is holding a special Peter Rabbit Party on Saturday 22nd May at 2.00 where Peter Rabbit himself will be present and in addition to the film there will be games, party bags and prizes including one for the Best Dressed Bunny! Tickets can be booked on line; children £10, adults at normal prices.

“It’s been a long, frustrating time for everyone but recently we’ve been busy behind the scenes getting everything ready for reopening. We’ve had all the upholstery thoroughly cleaned and all the measures are in place for ensuring everyone’s safety.

The Royalty is going to be spruced up and arrangements are in hand for the Wurlitzer organ to be played at some of the evening shows.”

Other films lined up for the coming weeks include The Sound of Metal which stars Riz Ahmed as a heavy-metal drummer whose life is thrown into freefall when he begins to lose his hearing.

For horror fans there are The Conjuring:The Devil Made Me Do It, Spiral:From The Book of Saw and A Quiet Place II.

Disney’s new Cruella, with Emma Stone and Emma Thompson, arrives for half-term and in June, another Oscar winner The Father, with Anthony Hopkins and Olivia Colman, will reach the screens to be followed by Supernova, another human drama with Colin Firth and Stanley Tucci, and then the sci-fi adventure Black Widow. On the 27th May for one night only, both cinemas will show Sir Alex Ferguson Never Give In, a revealing and deeply personal documentary about his life from his working-class roots to becoming one of the greatest football managers of all time.

A Q&A with Sir Alex and Jason Ferguson is included.

“We’ve been waiting a long time,” said Mr. Morris, “but we really have got a strong line-up of films now that we are finally allowed to reopen. And the cinema really is the only place to see a film.