Stage Six officially begun at 10.45am this morning from Carlisle’s Dalston Road and the pro cyclists made their way across Carlisle and the surrounding area and Eden before hitting the North East.

Mark Donovan was among the early Stage Six leaders along with legendary rider Mark Cavendish as the Tour of Britain passed close to his childhood home in Penruddock earlier today.

Mark, who rides for Team DSM, was lying ninth at the start of today’s 198km leg from Carlisle to Gateshead.

There were loud cheers from Penruddock primary school pupils near Motherby as the 22-year-old ex-student peddled by.

And a short distance along the road, Mark’s dad, Pete, was watching along with a large and vocal group of family friends, some waving home-made banners.

“It’s going past his old schools at Greystoke and Penruddock so it’s fantastic.

“He knows these roads really well, going up on to Hartside, going up Killhope and into the Pennines — when he’s back here, that’s where he rides.”

Mark — a former Keswick School student and member of Penrith-based cycling club Beacon Wheelers — and his fellow Tour of Britain riders will travel from Hawick to Edinburgh tomorrow before the final stage of the race, from Stonehaven to Aberdeen, on Sunday.

Here’s a selection of photos from the event. We’d love to see yours too! Email [email protected] 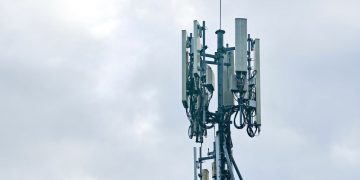 The installation of 5G antennas is set to begin at a communications site in Allerdale.