New signing for Kendal Town ahead of Newcastle Town clash

Kendal Town manager Craig Dootson has made his first signing for the club ahead of their home game with Newcastle Town.

He has recruited 19-year-old central midfielder Tommy Grindrod from North West Counties League side Ashton Town and he is eligible to play against Newcastle.

Grindrod was a junior with Northwich Victoria and then captained the youth team at AFC Fylde before joining Ashton Town.

He is described as a very energetic player who is predicted to become a crowd favourite at Parkside Road.

Dootson is hoping that his side can bounce back from their recent set-backs – a seven goal pounding at Runcorn Linnets and then a 2-1 home defeat by Appleby in the quarter final of the Westmorland Cup.

“Those two performances weren’t good enough and I expect a big improvement against Newcastle,” said Dootson.

Kendal are four points from safety, next to bottom of the NPL West Division, with only Market Drayton below them in the table.

Like Kendal, their rivals in distress have also changed manager this week with former player Matt Johnson taking over in the hot seat. He has moved quickly to strengthen his squad, recruiting five new players on Friday for their trip to Mossley.

They also play Newcastle Town on Monday night as they catch up on fixtures. They are among three clubs in the League who have only played 19 games, a good bit behind most others – with five in hand OF Kendal and just five points behind. 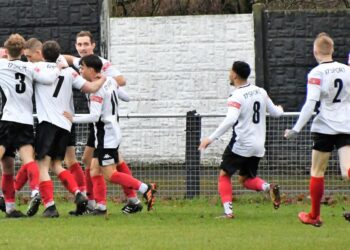