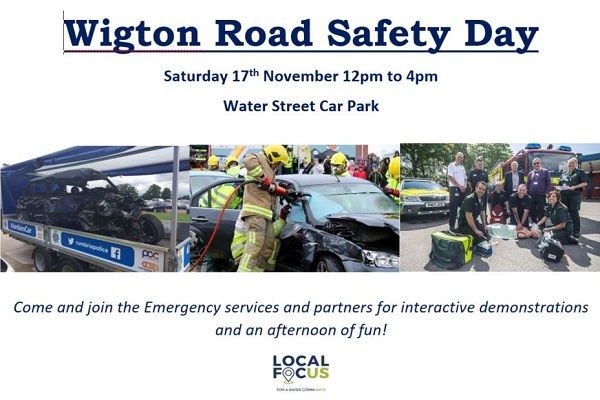 An event is being held at Water Street car park in Wigton on Saturday (17 November) to promote road safety in the town.

The event is being organised by Allerdale Local Focus Hub, including organisations such as Cumbria Police, Cumbria Fire and Rescue, North West Ambulance Service (NWAS) and Cumbria County Council.

There will also be input from organisations such as Cumbria Road Safety Partnership (CRSP) and Young Cumbria and the support of Wigton Town Council.

The event is being held in the car park between 12pm and 4pm.

There will be lots to see and do on the day including a road traffic collision extraction demonstration by Cumbria Fire and Rescue and featuring NWAS, demonstrations on the importance of passing cyclists safely, videos and much more.

Suzanne Redikin, Manager of Allerdale Local Focus Hub, said: “The aim of the event is to help demonstrate to all road users, but particularly young drivers, some of the dangers to be aware.

“Agencies such as the police, fire and the ambulance service see the outcomes of serious road traffic collisions every day. Together with other partners, we want to do all we can to reduce the number of such incidents and make Cumbria’s roads safer for all.

“We would urge people of all ages to come along but we’d particularly urge parents to speak to teenagers and bring them along so they can help us reach new and soon-to-be drivers.”

Cumbria’s Police and Crime Commissioner Peter McCall said: “I know from the people who contact me that improving road safety and tackling anti-social driving and speeding is of huge concern to many in the county. Which is why I welcome such events, particularly as I believe it ably demonstrates the power of agencies and partners working together in the community to raise awareness and get the key messages out there.

“I too urge people to come along, especially the younger drivers and those learning, who are unlikely to have the experience and knowledge that makes a safe driver.”