Operation Owl takes flight to tackle the unlawful killing of birds of prey. 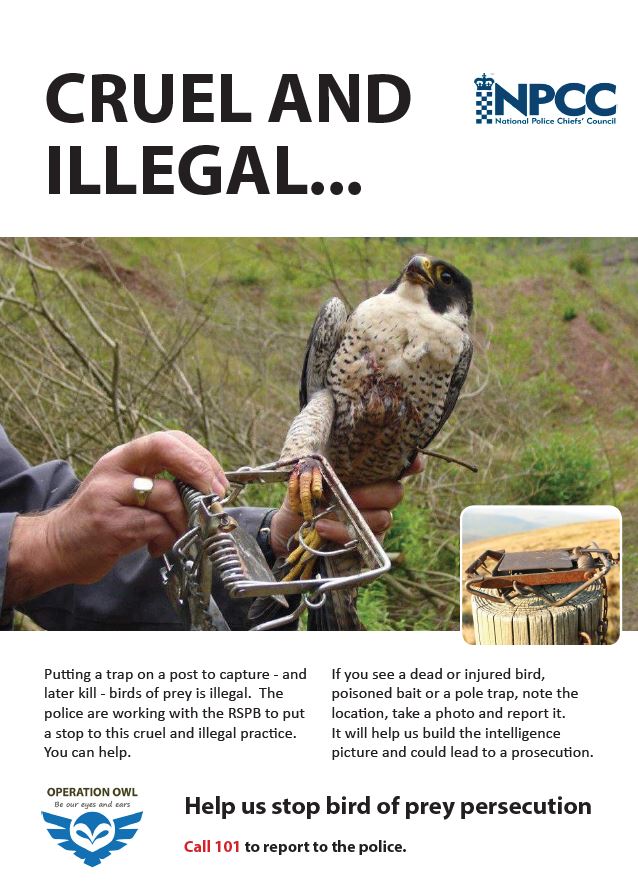 This weekend, Rural Crime teams in 26 police forces across the country will be intensifying their efforts to tackle the persecution of birds of prey.

As part of Operation Owl, Cumbria Police has joined up with 25 other forces and are asking people who see a wildlife crime scene to ensure they accurately record information and report it to their local force.

Launched in February 2018, Operation Owl is a joint initiative by North Yorkshire Police, the Royal Society for the Protection of Birds (RSPB) and the Royal Society for the Protection of Animals (RSPCA), together with the North York Moors and Yorkshire Dales National Parks. The initiative set out to raise awareness of raptor persecution, encouraging the public to be vigilant for signs of this criminal activity, and to report suspicious activity to the police.

In June this year, Operation Owl was rolled out nationally and this awareness weekend will be the first event of its kind outside of North Yorkshire.

A Cumbria Constabulary spokesperson said: “This weekend, the Constabulary will be supporting a multi-agency operation to tackle the persecution of birds of prey, which is a criminal offence.

“As part of Operation Owl, we are asking people who see a wildlife crime scene to ensure they accurately record information and report it to police.

“Birds like peregrines, red kites and hen harriers are deliberately and relentlessly shot, trapped and poisoned in our countryside. The more information available to law enforcement through reporting, the greater chance we have of prosecuting offenders.”

Two events are taking place across the weekend to show support and take action as part of Operation Owl. They will give people the opportunity to speak with officers and partners such as The Royal Society for the Protection of Birds (RSPB) and the Friends of Red Kite representatives about the issue and how the public can help.

Both events, one at Kielder Waterside in Leaplish and one at the Bird Of Prey Centre in Haggerston, will run from 10am until 4pm on Saturday (September 21).

Wildlife Officer PC Lee Davison, from Northumbria Police, said: “We need to educate people about the risks and consequences of killing birds of prey. It is a criminal offence and the public can help us root out those responsible by sharing information or reporting crimes.

“Birds like peregrines, red kites and hen harriers are deliberately shot, trapped and poisoned in our countryside. The more information available to law enforcement through reporting, the greater chance we have of prosecuting offenders.

“If you notice anything suspicious, like a dead or injured bird of prey or a trap then call officers immediately. Be sure to take photos where possible and remember not to interfere with what could be a potential crime scene.

“Together we can help put an end to the illegal killing of birds of prey.”

North Yorkshire Police Sergeant Stuart Grainger is leading on the initiative. He said: “It’s really positive to see so many police forces and organisations across the country committing to support Operation Owl both this weekend and moving forward – sending a clear message that bird of prey persecution will not be tolerated.

“Here in North Yorkshire, we are determined to put a stop to this unacceptable crime and to ensure our beautiful county is the haven it should be for so many birds of prey. The public’s support can make a huge difference, keeping their eyes and ears open for signs of persecution which can then be reported to us to investigate.

“We look forward to meeting and engaging with many members of the public this weekend and showing them just how important their role is in helping end bird of prey persecution for good.”

National Police Chiefs’ Council Lead for Rural Crime, Chief Constable Darren Martland said: “Disturbing our natural environment by shooting, trapping and poisoning birds of prey is a criminal offence. I therefore welcome the work of forces across the country via Operation Owl, to increase awareness of birds of prey persecution, and to engage with our rural communities and partners in addressing these crimes.

“Our ask of the public is simple: if you come across a wildlife crime scene, for example seeing a dead bird or objects that may be related to a wildlife crime, accurately record what you find and report it to police. The more information available to law enforcement, the greater chance we have of prosecuting offenders.”

Superintendent Nick Lyall, Chair of the England and Wales Raptor Persecution Priority Delivery Group (RPPDG) said: “Killing birds of prey is against the law. You can help us root out the culprits by sharing information or reporting crimes. If you notice anything suspicious, like a dead or injured bird of prey, or a trap, call the police on 101. Take pictures on your phone, and remember not to interfere with what could be a crime scene. Thank you.”

Head of the UK National Wildlife Crime Unit, Chief Inspector Lou Hubble OBE, said: “Tackling Raptor Persecution is a UK Wildlife Crime Priority.  I am deeply frustrated that we continue to see some of our most iconic birds being persecuted including Golden eagles, Red kites, Buzzards and Goshawks.  It’s 2019 and here in the UK Hen Harriers are close to extinction through continued persecution.  We need to make these crimes socially unacceptable in all communities.  Please be our eyes and ears on the ground and report anything suspicious to the Police.”

For more information about Operation Owl, and what to look out for in identifying bird of prey persecution, please visit www.operationowl.com