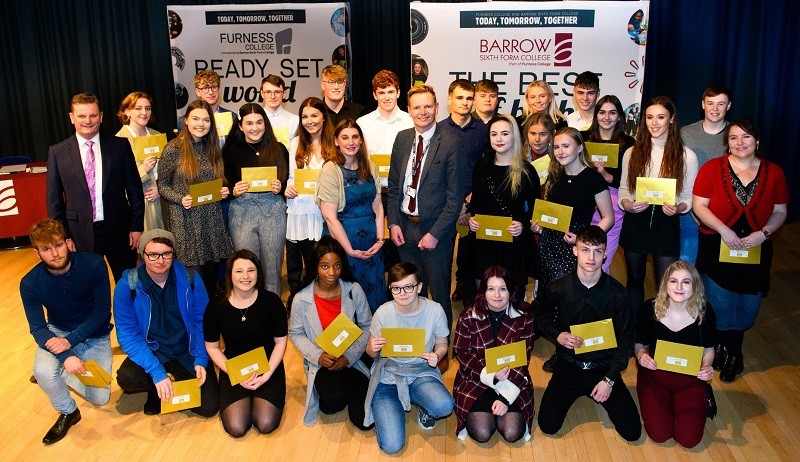 Some 35 students who had shown not only talent but commitment to their studies were recognised for their academic and personal achievement at the event at the Rating Lane campus.

“I have worked alongside you all in various ways for the last two years and I have never failed to be impressed by the maturity you bring to the college, your passion for education and your drive to become the best you can,” he said. “As I stand here, I am genuinely proud of you all.”

Awards were given as monetary prizes ranging from £100 to £1,000 for the top student. Many have now gone on to study at universities or start their careers.

Guest speaker Emma Aubrey, Headteacher of Dowdales School, praised the students’ success and spoke about how excited she was to return to sixth form where she had completed her A levels.

“Don’t let there be any barriers to your career,” she told the award winners. “You have proved you can!”

Prize winners were selected by specialist sixth form staff on the basis of their academic excellence, commitment to their chosen courses, attendance and personal achievements during their time at the college. Chair of Governors Caroline Vernon gave the vote of thanks.

Elliott Stockdale, who achieved 4 A*s at A level and an A in his extended project, was named Student of the Year winning the top prize of £1,000.

Elliott, a former Walney School student, is now at Cambridge University studying a degree in economics and also plays rugby league. He is also a finalist in the British Education Awards 2020 in recognition of his ‘brilliant academic results and extracurricular success’ at A level.

“I’m really grateful to everyone here at college, all the tutors and the support staff, I could not have asked for any better,” he said. “I’ve not decided what to spend the money on yet, I’ve never had so much money in my life.”

He said his degree studies were going well, that he had met new friends from all over the world and was enjoying his time in Cambridge.

“They know me as the lad from up North who turns up to lectures in my rugby gear.”

Josie Curwen won an award as the top performer at college in her Level 2 studies. After spending some time out of mainstream education she impressed tutors by her spectacular return.

Principal and Chair’s Student of the Year

A pair of Workington gym owners have set their members a challenge of a 24-hour workout-athon to raise £10,000 for...